When a battery is charged repeatedly, its capacity decreases. This makes mobile phones, laptops or electric vehicles that use the battery less autonomous and finally we have to change the battery or acquire a new device. As we have seen that this problem can be solved in part by adding some titanium to the battery cathode. 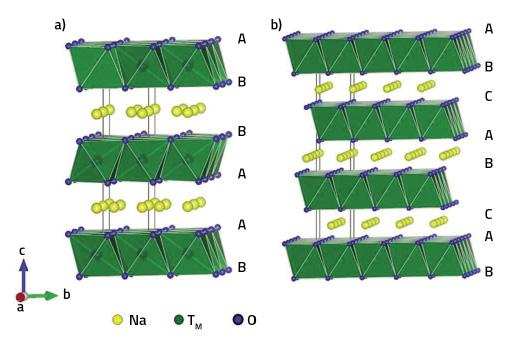 Lithium-ion (VOL) batteries were key in the development of portable devices, electric vehicles and renewable energies. Today, however, the unavailability of lithium, the unequal distribution of lithium in the world and the environmental damage resulting from the use of nickel (Ni) and cobalt (Co) in this type of batteries put this revolution in doubt.

Due to the development of recent years, the cost and availability of raw materials are important, so it has been proven that sodium ion batteries (NIB) can become substitutes for PAHO. Thus, the laminar oxides of sodium and manganese (Na and Mn respectively), without Co and without Ni, have become very interesting.

This interest is largely due to favorable electrochemical processes and the fact that the main electroactive transition metal is Mn. In short, Mn is an affordable, clean and cheap element that, with more than one oxidation situation, allows the synthesis of compounds for the desired adaptation of the redox potential (the most used pair is Mn3+/Mn4+).

The doping of these titanium lamine oxides (Ti) has been proven to improve battery life and can lead to better capacity maintenance in each charge/discharge cycle. But before explaining the role titanium plays in it, let's look at what the structure of the laminated oxides is and what its main problems are.

Laminated oxides used for sodium ion battery cathodes can distinguish layers of oxygen, transition metals and sodium. The transition metals are located in the octahedral holes between the two layers of oxygen, occupying the rest of the interoxigenic gaps. Thus, depending on the gaps in which sodium atoms are located, P and O structures are distinguished: They are called P when sodium atoms are found in trional prisms and O when they are in octahedral holes. Numbers in the name are also used indicating the number of sodium layers needed to describe the entire structure. Thus, structures such as P2, O2 and O3 can be available depending on the relative position of the oxygen layers.

Studies show that P structures are more appropriate for battery cathodes than O structures, as sodium atoms move more easily from one prism to another than from one octahedron to another. However, depending on the conditions and amount of sodium used, transformations of P> O occur, limiting the process of charging/discharging the battery. 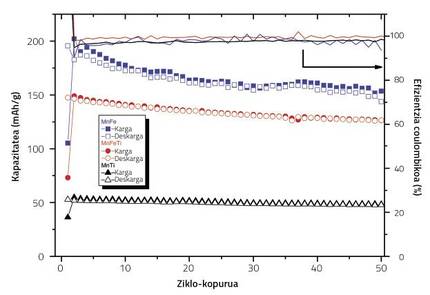 Figure . Capacity depending on load/discharge cycles. Diagrams of the three compounds: without titanium in blue, the highest concentration of titanium in black and the semivia in red.

In manganese laminar oxides, the active element is Mn. That is, during the battery charge/discharge process, when sodium is extracted/introduced from laminar oxide, manganese captures/releases electrons from sodium, becoming Mn3+/Mn4+. This is the main problem of these lamine oxides. Unlike Mn4+, Mn3+ suffers a distortion of Jahn-Teller (JT) due to its electronic configuration. As a result, the octahedron formed by the six oxygens around the manganese is lengthened and shortened, and given that in each load/discharge cycle the transformation of Mn3+{ Mn4+> Mn3+ occurs, which negatively affects laminar oxide during cycles.

To address this problem, laminar oxides are dosed with inactive elements, such as magnesium and titanium, which do not capture/release electrons during the battery charging/unloading process. In this sense, researchers from CIC EnergiGUNE conducted a study based on the compound Na2/3Fe0,2 Mn0.8O2, which is the laminar oxide of iron and manganese that obtains the most favorable electrochemical conditions. In the study we saw that by doping this compound with different amounts of titanium, the evolution of the capacity from cycle to cycle changed. Recently, in a paper published in the journal Journal of Material Chemistry A, we have explained the role of titanium in this regard, combining electrochemical measurements, x-ray absorption spectroscopy and theoretical calculations using the theory of functional density (DFT).

In short, it can be said that titanium is capable of absorbing the octahedral distortions of the active metals in the area, in this case manganese. That is, although the electronic configuration does not produce JT distortions, titanium is able to adapt its octahedron to the distortions of the environment. In essence, being weaker the titanium/oxygen bond, adapting to the movements of the environment, this metal behaves in the structure as a cushion capable of giving stability to the entire structure.

In any case, titanium concentration should be taken care of properly. The study was based on the Na2/3Fe0,2 Mn350O2, which is the one that obtains the best electrochemical condition between the rolled iron and manganese oxides. In the research we used three concentrations of titanium, of which only satisfactory results were obtained. In the absence of titanium, as loading/unloading cycles were made, the cathode's capacity decreased markedly. When we replaced all the iron of the compound with titanium, the initial capacity decreased considerably. Instead, when we replaced half of iron with titanium, the initial capacity was adequate, as well as its cycle to cycle evolution. In fact, as the titanium concentration increases, the concentration of Mn3+ that suffer from the stretching/shortening of its octahedrons increases, making the battery capacity low from the beginning. However, when the doping concentration is lower, Mn3+ will be less in the compound, and in addition to having a higher initial capacity, the titanium blade in the structure allows to better maintain the capacity cycle by cycle.

As a reflection of this character, we theoretically calculate the distortion rates of all the transition metals of the compound (Fe, Ti, Mn3+ and Mn4+). This index tells us how far away from a regular octahedron made up of six oxygens around each atom of the transition metal.

Thus, for the three compounds analyzed, cation Mn3+ was the one with the highest distortion rate. At the other end was Mn4+, the closest to a regular octahedron. This is easily understandable considering that the Mn3+ cation suffers JT distortion due to its electronic configuration. 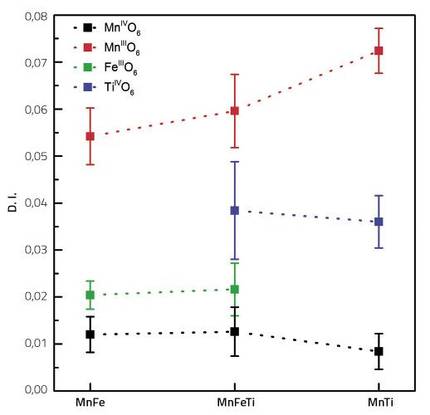 Figure . Distortion index of transition metals based on the amount of titanium used.

The most striking thing is the difference between You and Faith. The distortion rate of titanium is two to three times higher than iron. Basically, these two transition metals should not themselves present distortions, as their electronic configuration does not affect them. The distortion of these two inactive metals is due only to the distortions of the surrounding octahedrons. Thus, the fact that the titanium index is two or three times higher than iron indicates that titanium better adapts the distortions of the area than iron. That is, if we compare the inactive components of the cathode with a cushion, its distortion index would indicate the degree of sagging of the cushion. The higher the distortion rate, the more flexible the cushion will be, which will facilitate the absorption of the irregularities of the surrounding octahedrons.

In that work we were able to verify that titanium could improve the duration of possible sodium ion batteries. That is, we could more often charge the laptop or electric vehicle that used this type of batteries without damaging too much the capacity of your battery.

However, this is a small step further in the way of sodium ion batteries. It is yet to be seen how other dopantes other than titanium would affect them. For example, it has been proven that sometimes very interesting results are obtained even when zinc is used as doping, which is not yet understood very well.

Likewise, in laminar oxides type P2, when sodium is detected in prisms that share a side with transition metal octahedrons, it has been observed that the transformation P2> O2 is complicated. This facilitates the process of charging/discharging the battery. Therefore, in addition to doping, the role of sodium atoms may have to be taken into account.

In all these investigations we are involved different research groups of the line of sodium ion batteries of CIC EnergiGUNE.