Eighth edition of Teknopolis. It will appear on January 22 at noon in ETB2 and at dusk in the first ETB chain. First of all you will see Aitziber Agirre's smile as a reader and receive his welcome. Below is the revamped chart of this Teknopolis 2006.
Elhuyar News
Services
Teknopolis without errors
01/01/2006 | Kortabarria Olabarria, Beñardo | Elhuyar Zientzia Komunikazioa 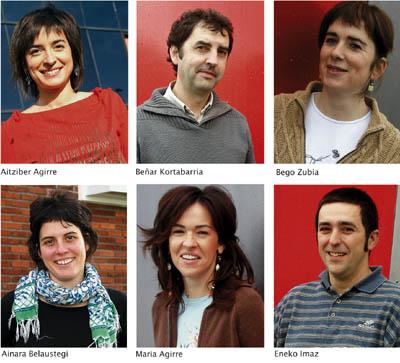 With the new year, reports on the latest technological developments developed by researchers from here and there will come at full speed, brushstrokes on basic science, more recent news of the week, memorable phrases of the history of science and the names they have had... all of them brought from the Teknopolis editorial team: María Agirre, journalists Beñar Kortabarria and Bego Zubia, and biologists Ainara Belaustegi and Eneko Imaz.

The innovation suit was presented last year by Teknopolis, due to the changes experienced over previous years. The TV program will not change costumes, as it aims to deepen the innovations introduced.

From the path started last year, it is intended to give priority to visibility, which enters naturally through the eyes. It is a difficult job, yes, but there are many things that cannot be seen at first glance. Graphics will therefore have an increasingly notable presence in the program. A special effort will be made to draw and show what camera targets cannot catch.

With the objective of visibility, vitality will also be sought in the program structure. Long reports will be interspersed with shorter ones, calm and in-depth interviews with short-lived news, bites based on curiosity or the unknown viewpoint that disseminate concrete messages... All this seems like a photo of chaos, not of feet or head, but it is not so, it has some thread. The same rigidity, as something sought, can be one.

To be able to hold the Teknopolis session, however, it has had to resort to the formula of previous years, that is, television will put the technical means and Elhuyar human resources.