Innovation is fashionable there and here, and innovation is the future. The seventh edition of Teknopolis seems to come on this wave, as in January it will reappear with many new features in ETB programming.

The innovation most highlighted by the public can be the new appearance of the program. And it is that to the session the card has been changed, the elements for transitions will be new, special emphasis will be placed on graphism... And in presentations. With the cession of the studies of Miramón, the recordings of the program will be realized in other places, directly related to the topics or, simply, in those that offer a good image, being one of the main ones the Kutxaespacio of the Science of Miramón. The comfort of studies and technical means will be lost when making the leap, but they will gain freshness and variety.

More than a change in appearance, in the contents: brief spaces dedicated to basic science, anniversaries of science, quotes, central topics in depth of sporadic form, possibility to meet the researchers in their places of research and in the personal sphere 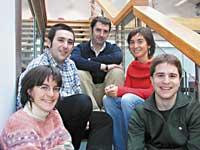 As seen, with the intention of improving the program, work is also intensified. Following the same logic, the work team will be wider than in previous years. In the crew also as presenter Aitziber Agirre, as last year, Maider Egues, Eneko Imaz, Joseba Imaz, and Arantxa Txintxurreta, and Be ar Kortabarria ar Kortabarria. A curious mix: people with experience in dissemination but not on television, with experience in journalism but without experience in dissemination, but with incredible curiosity and desire... Everyone's work will be necessary to take the boat to the safe port weekly.

The harvest of the new season will begin on January 16 and will continue every Sunday, in Spanish at noon and in Basque at dusk. The seventh edition of the program that Elhuyar manufactures for ETB, will conclude with 135 complete programs.

To be able to hold the session of Teknopolis, however, it has had to resort to the formula of previous years, that is, television will put the technical means and Elhuyar the human resources. For this reason, Teknopolis will continue to rely on institutional and business support in this seventh edition. The sponsors are: Departamento de Industria, Turismo y Comercio del Gobierno Vasco, Departamento de Educación del Gobierno Vasco, Mondragon Unibertsitatea, Centro Tecnológico Ikerlan, Fagor, Universidad del País Vasco and Eusko Tren. Without them, television programs could not be made.