Ten years ago, 25 of the Soviet Communist Party. In Congress, the century project was an announcer. This gigantic project has been buried shortly after.

The idea was to transfer 400 km3 of water each year from the rivers of northern Siberia to the Volga and Sutxona rivers to water the territories surrounding the seas of Kaspio and Aral.

Work began in 1983. This year the second stage opened. The construction of a canal called siberial is involved. This channel, 2,400 kilometers long and 200 wide, had to pour the waters of the Siberian Ob into the Aral Sea. This immense idea of Brezhnever has been buried by Gorbatxov's pragmatism.

Their aspirations were fervent drivers within the Communist Party. Politicians and economists from the republics of South Kazakhstan and Uzbekistan have worked hard to boost the transbase project. The water obtained from the north would increase rye production by 25-30 million tons.

However, in the last two years the project has been spoken out against. The Novosibirsk Research Institute, which coordinates the exploitation of Siberian resources, has been one of the great critics. Its researchers have described the project as an economic, ecological and political madness. The immense investments that should be made on the one hand would not be recovered until at least thirty years after the completion of the project. On the other hand, the project would lead to the destruction of eleven animal and plant species. The Siberian environment would change radically.

Nor in the West, due to the transfer of cold Arctic waters, this project had great support. There was fear that Siberian weather and climate would change a lot. 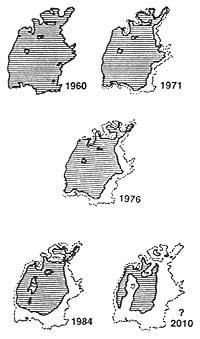