Shifts to the Sahara

In general, it is recognized that the Sahara, the largest desert on Earth, is growing or spreading.

However, an American study, NASA's C. I. Led by tucker and friends, the Sahara has decreased since 1984. According to data collected by meteorological satellites in polar orbit between 1980 and 1990, the evolution of the surface of the Sahara has been as follows:

According to Tucker and his friends, the mobility of the border depends on the amount of rain he has made at every moment.

However, to obtain a clearer result, a few decades must pass, in which data can be collected. 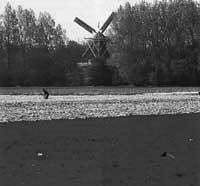