Force of waves to the house

Thanks to a curious system designed by an Australian oceanographer, the energy of the sea waves can become a source of energy to generate electricity in our homes.

To do this it is necessary to build an extensive coastline in the shape of a parable that channels the waves towards a certain area. On this area is placed a large column that extends the strength received. At the back of the column are the turbines and, through complex air pressure sensors, the turbine propeller can only turn in one direction. 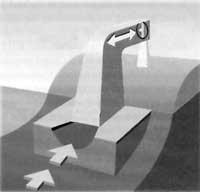 This invention has been tested by oceanographer Tom Denniss for the moment in the laboratory, taking into account various variables. Like the force of the waves, the depth of the water and the shape of the coast. Parabola is, in his opinion, the most appropriate structure to capture and reflect energy and that is the key to his invention. In fact, similar structures that have been proven so far have not been profitable.

According to Denniss, a parabolic coast of 40 x 20 meters can reach an energy of 250-1,000 kilowatts in a day. It also points out that it is cheaper than the energy generated by the forces of the wind and the sun.