Where does the water from the fountains come from?

The Water Consortium of Gran Bilbao manages the water supply of about one million inhabitants. In 1967 the construction agreement of the Consortium was adopted in the Metropolitan Area of Bilbao. Although the Consortium was initially made up of 19 municipalities, it currently has 33 members. To discuss the origin and treatment of water, Ángel Silveiro, head of the plant, and Jon Ander Etxebarria, head of the laboratory, were the interlocutors in the visit to Venta Alta. 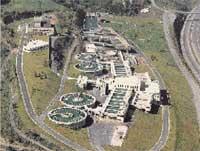 Consorcio is in charge of jointly managing water supply and sanitation services in the metropolitan area of Greater Bilbao. This time we will talk only about the supply. The water of any water supply system requires one of these two sources: the water currents or the system regulated by reservoirs. The direct collection of water from the rivers requires that the flow of the same is necessary for the supply throughout the year. This is not the case of the rivers in our environment, which are short and variable in flow. Therefore, the only solution is to collect water in winter and use it throughout the year.

The supply system managed by the Water Consortium of Gran Bilbao is based on reservoirs. Groundwater use is another option, but the Consortium carries out surface water exploitation. In reservoirs they store water from variable flow rivers. The Water Consortium of Gran Bilbao takes water from different systems, but the one that reaches the Venta Alta treatment plant has its origin in the Zadorra system. The source of the supply of the consortium is the transfer, since they bring the waters of the basins of the Mediterranean slope.

An adequate supply system requires that the water level of the reservoir be sufficient to maintain supply throughout the year. In addition, to keep the river alive below, you must reach the flow you need throughout the year. Rainfall, basin life and geography, that is, the study of the existing possibilities for the construction of a reservoir in the basin, are three minimum requirements to be considered in the construction of reservoirs. The aim of these efforts is to achieve a total endowment. However, when natural variables intervene it is impossible. The Water Consortium of Gran Bilbao offers a 95% guarantee. This would be a supply problem of 100 to 5 years. In any case, the value of 95% has been calculated according to the current consumption. Therefore, if consumption increased, the guarantee of supply would also decrease.

Decanters for sale Alta. In the interview A. Head Plant Silveiro; J. A. Etxeberria, head of laboratory and K. Head of Human Resources of the Zarzosa Water Consortium, together with the member of Elhuyar, in the passage on turbines that help decantation.
I. Nogeras

The raw material used by the Water Consortium of Gran Bilbao is the water from the reservoirs. The water quality analysis of the Zadorra system is the first step. This is done twice at each season of the year, so eight analysis sessions are held each year. This study is carried out taking into account two main criteria. The first is the pollution of the rivers and the nature of the purification that this implies. The second is the degree of eutrophication. As for pollution, it can be said that the Zadorra does not pose problems of concern. This is not the case with eutrophication. The technicians of Venta Alta told us that this parameter is not well known, but it is more important than people thought. In the Zadorra system, agricultural activity is very important and as a result, water streams accumulate components high in nitrogen and phosphorus, which considerably increases natural eutrophication.

Eutrophication is the result of enriching water in nutrients and can be a natural process. For example, algae can increase due to the presence of excessive nutrients in the water, which can give flavor and smell to the water. Then they die, sink and decompose the algae. On top of that, warming of surface water by sun effect results in temperature and density gradients, which makes the surface warmer water of low density and the bottom cold water of high density. These two masses of water will not mix until the fall storm. Algae begin to break down by consuming oxygen.

Water outlet from the Venta Alta treatment plant to the supply network.
I. Nogeras

The temperature and density gradient makes the water layers not mixed and a lower layer is left with oxygen shortage, i.e. an anoxic layer. This process will lead to the dissolution of several salts (iron, manganese and sulfur). This has an immediate impact on water quality.

The design of the system allows the use of water in hydroelectric use before its incorporation into the supply network. This is what Iberdrola S.A. does. Water from the reservoir is taken to another small reservoir after use in the hydroelectric plant. As the second reservoir is emptied, the opening of the water pass above is ordered. The water released passes through the turbines before reaching the second reservoir. In general, water is disturbed intermittently. When passing through the turbines, the water is ventilated so that the oxygen dissolves evenly. Fe and Mn will again precipitate and water quality will improve. This process, that is, the ventilation of the water through the turbines, therefore has the same effect as the autumn storms causing the mixture of layers of water.

The consortium treats drinking water to ensure its potability. The worst waters treated in the consortium can be A3 in the worst case. Although there is treatment for A3 level waters, it has not been used until now. At the moment the treatment is level A2.

J. Head Laboratory Sale Alta A. With Etxebarria.
I. Nogeras

It can be said that the treatment applied to water in Venta Alta is anti-peat. A coagulant with chemical treatment is added to the water. They are salts from strong acids. The balancing forces between particles and water that cause turbidity are broken and cause these particles to “come out.” These flakes have still little weight and to facilitate their sedimentation polyelectrolyte is also added to the water. Physical processes are then applied. Among them, the decantation of flakes generated by the salinero. Turbines also contribute to this. Decantation is the separation by gravity of the products from a mixture, being at least one of them liquid.

As in water tanks, they accelerate decanting, that is, they “help” the decanting process. A good decanting process allows us to predict that the water quality is very good, as Fe and Mn can be eliminated. But with 100% of the decanted water it does not happen. Because flakes can stay again in the water when the sun warms the water in the decanting vessels or by wind effect. Foreseeing all this, a second step is taken to ensure the quality of water: filtration.

The filters are beds with silica sand in the background. The water passes through the bed and the flakes remain in the sands.

After filtration, the water is sterilized by chlorination. Although much has been said about this process, for the moment no products are known to replace chlorine. Chlorine persists in the water and ensures the sterilization of the water until it leaves the tap. 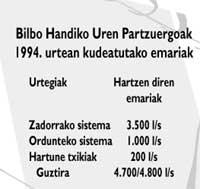 The usual treatment in Venta Alta ends in the chlorination stage. After all this, the water is in a position to be distributed. If water quality is worsened and level A3 is reached, ozonation and treatment with active carbon is expected. However, it is not used because it is not used. The ozonation would be carried out once the usual process is finished, by dissolving the ozone bubbles in the water. The contact time between the bubble and the water should ensure that the ozone passes into the water but not be lost.

Subsequently, the water would pass through active carbon beds. Although ozone is a good sterilizer, being gas does not ensure the effect on large networks, so ozone and chlorine are used, the substance that guarantees the safety of the process.

As mentioned above, A3 water requires stricter treatment measures. Among other things, ozonation and the use of active carbon beds are necessary. In this step of the process, many variables must be taken into account. Among other things, do not forget that the carbon beds to be used are bacterial. The beds must be reactivated and regenerated so that they do not harm more than for benefit. Filters placed on household faucet can also cause the same problem. If used for more than a month, it can be a good place for bacteria growth. 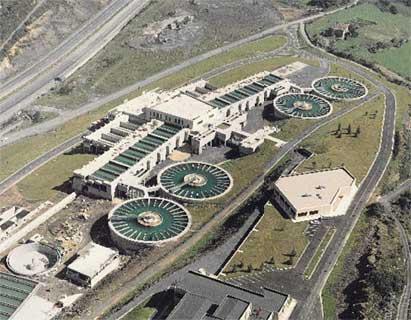 In addition to the aforementioned, the water that passes through Venta Alta receives a fluoridation treatment. In the supply systems of more than 300,000 inhabitants in the ACBC it is mandatory to use fluoros by legal requirement. Fluoro contributes to the consolidation of the bony parts of the human body and is believed to serve, among other things, to regulate the index of reeds. However, the dosage of fluoro should be done very carefully. Due to its stability, it is not lost in the network and can be harmful above a certain degree, so it can not be dosed above the required level.

Ozonation chambers. At the moment this process is not used, but is willing to use it if the quality of the original water worsens.
Water Consortium

To make the way we have explained, the water spends 2 hours in Venta Alta. It took 4 hours to reach it. In total, the water has made a 6-hour excursion.

Currently, the distribution network performance is 55-60% and the losses are 40-45%. The consortium itself manages the primary network, the main network that runs from the reservoir to the municipalities. The conductions that reach each of the homes of the municipalities constitute a secondary network that depends on each municipality. However, many municipalities have contracted the management of the Consortium. Managing the secondary network is not easy. There are many kilometers of pipes that need to be tracked and monitored and a lot of water is lost in them. 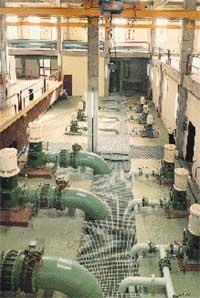 The reagents are added to the water before moving to the decanting vessels.
Water Consortium

If we add the meters of each house and compare them with the flow of the water meter that leaves the reservoir, the minimum loss would be between 30 and 35%. The technicians of Venta Alta indicate that it is the best case or the one considered optimal for a wide network. Within this ideal or optimal, that is, within this intermediate loss of 30-35%, are also included the waters used without counter, as the water sources of the planters. The technicians of Venta Alta estimate that the network of Gran Bilbao would save between 10 and 15% by maintaining the secondary network through streets. This is one of its goals for the coming years. 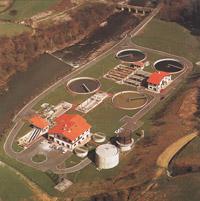