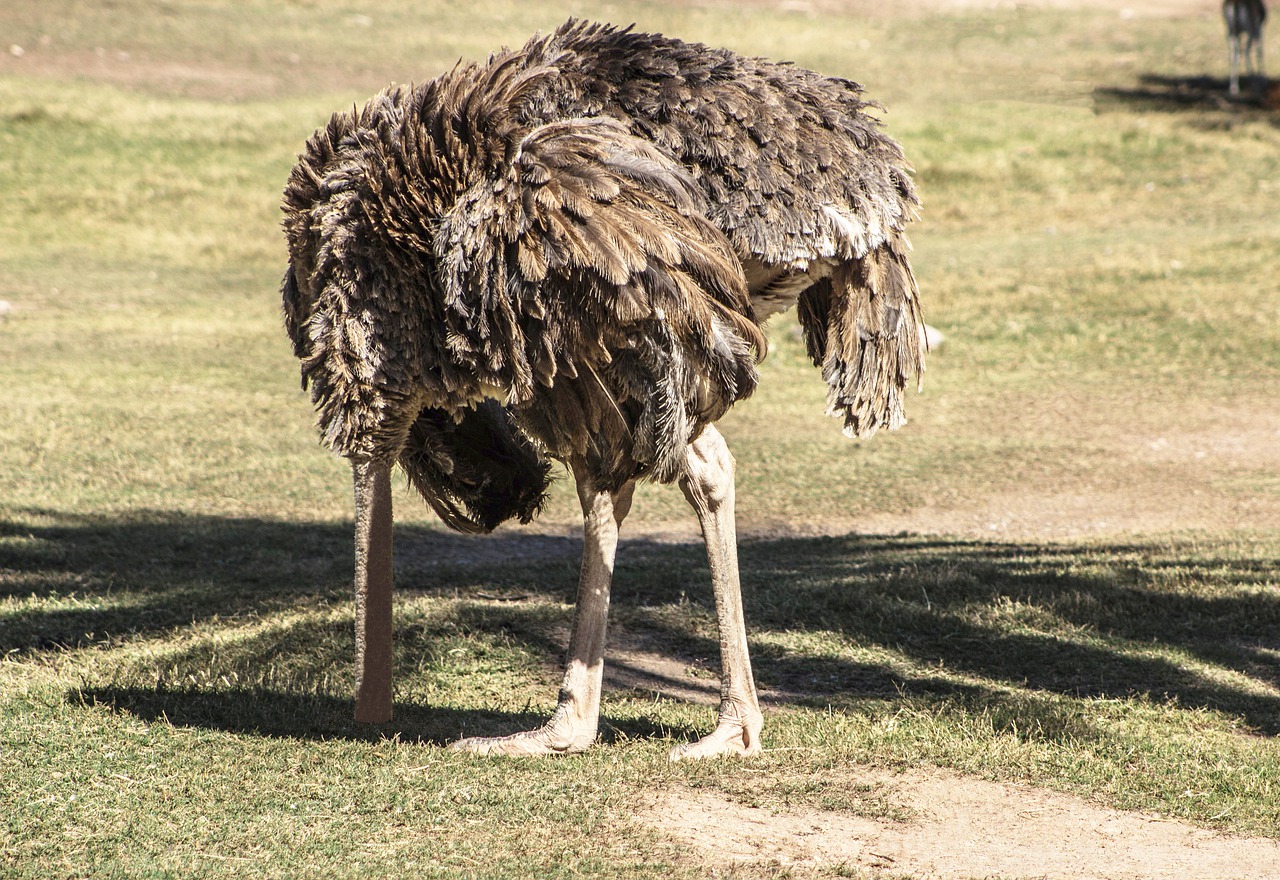 Like ostriches hide their heads underground in dangerous situations, deniers take refuge in conspiracy theories and unfounded beliefs against uncomfortable truths based on empirical evidence. Ed. PixabayAs is already known, another fact, denial, has gained the same presence as the pandemic itself. As the transmission of the virus increases, the ideas that question the existence and/or severity of the coronavirus also increase. But why? What is denial about? Will this phenomenon continue after the pandemic?

In general, two main elements can be found within negationism: the reality or denial of a certain evidence (historical, scientific...); on the other hand, the cause of this denial is the flight of an uncomfortable truth. Of course, there are many ways to do this, regardless of motivation, interests or other factors. In the case of the negationist profile, distrust of the subjects, fear and uncertainty about the situation are confused; being aspects that can be detected in all people, emphasis is placed on the heterogeneous character of negationism. It can be said, therefore, that it has the capacity to unite very different subjects.

Although nowadays it is a topic of bolus, negationism is not a new phenomenon: with digitality it has been updated, but its roots are the same. In any case, why have these behaviors that are based on denial increased? In addition to the atypical nature of the pandemic, mistrust towards administrations and institutions, the inability to understand its reliability or lack of information in the facós digital space (freedom of social networks, resonance boxes, dissemination of news… Internet pieces are abundant), they are often located at the heart of the boom (Arbar, 2021).

Search for simple answers to uncomfortable doubts and truths

Faced with an unknown and atypical pandemic, the deniationist flood with rapid responses gains strength. However, in the face of this flood, we should do more than protect ourselves; it is about tackling it. Therefore, in addition to closing the way to new deniationist ideas, it will be necessary to work on some strategies to curb the tangible mechanisms already in place. The deniers, however, tend to firmly maintain their convictions, even if they have evidence that they are wrong, so is it possible to argue with the deniers? 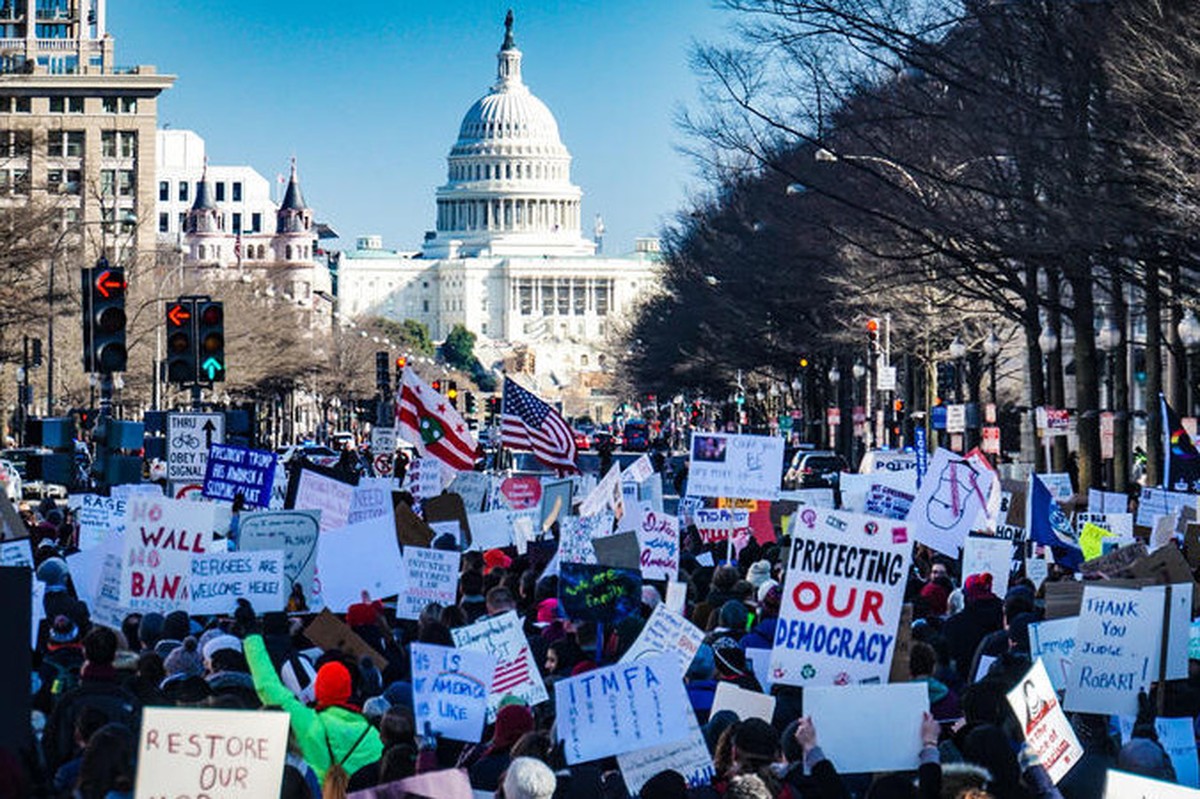 In many parts of the world there have been numerous deniationist demonstrations, among other things, organized by the virus environment, that is, that everything would be a “plandemia” or to “ask” freedom. In the image, for example, you can see American deniers in one of the many demonstrations against health measures. Ed. Ted Eytan

To avoid both negationism and the conflicts that take root there, there is no choice but to deal with the phenomenon, as passivity would render useless everything that has lived during the pandemic. However, Brandolini's law, in which more energy is needed to eliminate false information or nonsense than to create a new falsehood, requires great work. Is it worth spending time and effort to correct and clarify falsehoods? (Williamson, 2016). In view of the possible damage that may be caused by these false convictions that will be generated, it would be correct to point out that any false assertion deserves a response, efforts. Therefore, in order to curb these deniationist mechanisms in operation in the context of the pandemic, two solutions will be proposed and their need will be called for, one respectful discussion route and another resource to show science or approach scientific knowledge.

Research has shown that failure to dismantle scientific denial in some media can be detrimental. In the same vein, the results of the research published by the researchers Phillip Schmid and Cornelia Betsch in the journal Nature Human Behavior show that negative discourses harm more when they do not have an answer. In addition, they stress that either of the two response strategies offered in the article (based on the elimination of arguments on the subject, rebuttal topic in English, or trying to dismantle traps from the speech, the rebuttal technique) can partially mitigate the damage (Schmid & Betsch, 2019). However, there is one element as important as promoting debate, which must be taken into account in the interview itself: respect.

Discussion based on respect

The philosopher Lee McIntyre highlights the importance of this concept in his most recent work, How to talk to science denier. According to the thinker, the first step to talk to a pandemic, and in general to a science, is to build trust, showing patience, empathy and respect, and showing transparency and openness to the functioning of science. Therefore, for McInty, the challenge is not only that people accept certain facts, but that they begin to understand and value how scientists have gained their knowledge, how they have been based on rigorous analysis processes, cooperative testing and uncertainty tolerance. Thus, tangents can begin to identify more with scientists' values (and with reasoning processes) (McIntyre, 2021).

The spaces that build on the use of social networks are exclusive, uninformed and dubious: an adequate atmosphere to break negative views. In this way, these digital spaces take advantage of the freedom offered without being able to sustain their ideas or disseminate them among other messages. Ed. Pixabay

In addition to dialogue, it is essential to educate society in science, publicize the functioning of scientific mechanisms and accurately describe the nature of the field, warning of the close relationship between discipline and society. In general, the key to closing the negationist door would be to promote projects that allow us to make known the true nature and functioning of science. In the current context, science is a discipline of great prestige, but the scientific culture of society has not increased to the same extent. If due attention is not paid to the promotion of this culture, the possibilities of manifesting these practices based on denial can be multiplied. Thus, how will the pandemic affect people's interest in science and scientific knowledge? You will certainly discover new opportunities.

It should be noted that science, in addition to technical tools, puts on the table philosophical tools to reflect on our environment. A better understanding of reality can help us build a solid basis for making proper decisions (Fernández Niño, 2017). Therefore, it is necessary to have a basic knowledge of science, as well as to encourage collaboration in the fight against negationism: to raise awareness at the social level of the need to face rejection, outside the scientific sphere, and to bring this awareness to practice, always placing critical thinking on the line.

The latter will probably be the last piece of the puzzle that has appeared so far and will serve to unite the rest of the sections. In this context of Pandemic, and in the age of immediacy of information, most of the scientific knowledge that the general public possesses comes from social networks, and the separation of information and opinions is increasingly complex. Moreover, to the extent that the time to analyze and put into perspective the problems that affect society is very limited, critical thinking is more necessary than ever. In this unstable situation, besides taking care of one's own convictions, we must explore justified justifications to know why one thinks what one thinks and to clarify the nature of the reasons why one thinks. 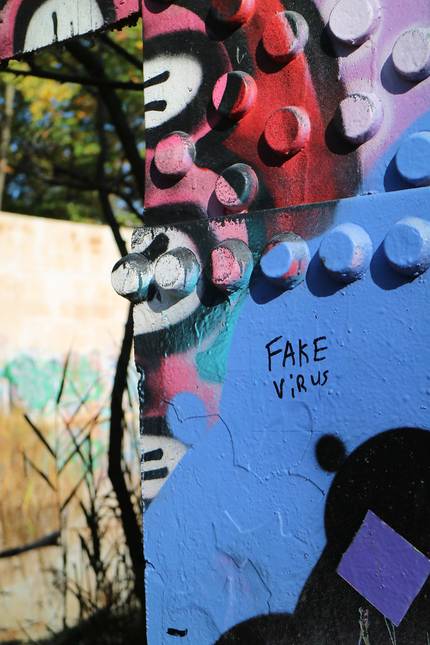 It is common to see posters, images and/or notices created by the streets in line with the deniationist vision. In this case it would be a message that denies the existence of the virus. Ed. Flickr

The nature of those who oppose science is adaptable, and although the context changes what will be denied, denial mechanisms will probably continue to work. However, this situation must not lead to despair. Although disabilities may be numerous, it may be even more dramatic to be able to adopt a passive attitude and extend the negative outlook. The paths proposed may seem unimpressive at first sight, but they can offer an appropriate starting point to revolutionize attitudes or decisions that promote these tangible ideas.

At the beginning of the pandemic, when we were all in our homes, it became clear that it would be imperative to work together to address this unusual situation. Although we are still in the pandemic today, since 2020 there have been many changes, both scientifically and technically, which will help us to reach the end faster. Although the fight against negationism is a great effort, it will be necessary to take this responsibility and discuss those ideas that are based on denial, even directly with the negationists, always in the line of critical thinking and interaction.