Focus on the dimensions of sound

The ear is a complex process. In fact, the human brain has to unify the information that comes from both ears in order to interpret a sound. Since the ears are physically separated on both sides of the head, the information the brain receives from each ear is different.
Focus on the dimensions of sound
01/09/2008 | Urruzola Arrate, Manex | Elhuyar Zientzia Komunikazioa

Precisely, the separation of the ears on both sides of the head allows the brain to determine the origin of sound. The three-dimensional sensation of the auditory system depends on the difference in time and amplitude of the sound wave that each ear receives. That is, by individual processing of the information of each ear and the comparison between levels and phases of both signals, the spatial location of the origin of sounds is obtained. Thus, the same sound produced by a single sound source will never be the same for both ears, since the sound waves make a longer journey than the one closest to the source.

Specifically, the difference between the signals of both ears is 0.6 milliseconds: the speed of sound in the air is 340 m/s and the average distance between ears is about 20 cm. The brain records this temporary delay and explains in which part of the face the sound has occurred. In addition, the study of acoustic levels, the differences in intensity and amplitude of sound waves that are collected in both ears, facilitates the brain an exact location of the origin of the sound source in space.

It is clear that the objective of the reproduced sounds is that they are increasingly similar to real sounds. Over the years, technological audio systems have been developed that simulate this sense of realism for the human ear. For example, in 1881 the first stereo system for theatres was designed. In the world of music, the first stereo recording entered the sales records in 1957. Until then the recordings were monoaural, that is, monochannels. These mono systems produce a sound similar to the one heard with a single ear and do not give the spatial feeling offered by the stereo. The improvement was evident.

Stereo is the first basic system that reproduces the location of recorded sound sources. The aim is to achieve a greater naturalness in listening to recorded sounds. Currently, the compact audio discs, most FM radio stations and some television channels emit audio signals in stereo. Although stereo sound may have two independent monkeys channels, signals from both channels are usually related.

The stereo sound is based on the difference in amplitude or intensity of the signal that reaches both ears. Relative amplitudes or intensities of real acoustic sources are calculated to simulate the spatial representation of the virtual source in a given location. For example, the simplest case of a stereo system would be that of a sound heard in the middle of two sources: in this case, the signal should appear in both channels with the same intensity. If, on the contrary, the source of a sound is desired to appear on one side, the channel intensity on that side should be higher.

The stereo method is the most used to represent sounds in space, but also the most basic. In fact, with only two channels, the dimensional feeling of the hearing system is very limited. Multi-channel sound systems generated significant improvements with respect to stereo. The design of the audio track consists of three or more channels in these systems, so the music team needs at least three speakers to be able to play each track.

Multi-channel sound includes several systems depending on the number of tracks and speakers. But all have the same structure. In fact, all systems have a speaker on the left and right, as well as another speaker for bass or bass, known as subwoofer. Subwoofer has as mission to make hear the lower audio frequencies that can not play traditional speakers. From there, more specialized channels can be installed depending on the system. For example, the 2.1-channel multi-channel sound system consists of only three speakers: two channels on the left and on the right and the lower channel. Hence the system name, 2.1: a speaker with two main and low speakers. In system 3.1, on the other hand, a central speaker is added that simultaneously emits the left and right channels, so 3.1: a speaker of three main and low speakers.

The best known of multi-channel sounds is undoubtedly the 5.1 system known as surround sound. It is a system of commercial cinemas and also of the Home Cinema or of the cinema facilities for the home.

The distribution of the sound channels is done in the same way in all the rooms: central speaker in the front, especially for the voices; two other front speakers to the left and to the right, for the music and the front ambient sound; and the rear speakers to the left and to the right, for the rear ambient sound. These last two are surround channels or those that produce the surround sound. That is, in total there are 5 main speakers, as indicated by the name of the system. To these five is added the speaker or subwoofer of the bass. The latter has a 0.1 reference on all systems and emits frequencies of the 20-80Hz range to highlight the lowest frequency components of the other speakers.

The well-known concept of surround sound was developed by Dolby Laboratories in 1982. It was the first surround sound system for cinema, a pioneer in creating a three-dimensional psychoacoustic perception. Currently this technology is very widespread and is also used for video games.

There are other multi-channel sounds like systems 6.1 or 7.1. They come from system 5.1 and are obtained by adding one or two new speakers on the back, respectively. But they are not so known, and until now that technology has spread very little.

Six types of speakers make up the 5.1 system of movie theaters, known as surround sound.
monsteraudio.net

The holophony for the ear is what means a hologram for vision: a three-dimensional auditory simulation. In the ears is used a head with omnidirectional microphones to record holophonic simulating the auditory conditions of the human mind. The objective is that when listening to the brain is able to detect the position of the sound source.

The recording head processes the difference in time and amplitude of the sound wave that each ear receives, thus collecting the three-dimensional sensation of sound.

The result is exciting. Proof of this are the holofas that can be heard on different Internet websites. Just have the headphones on hand to immerse yourself in the depth of the three dimensions of sound. But this is the main disadvantage of hoofony. The main reason for the scant commercial success of hoofonic sound is that it can only be detected with headphones. And faced with this barrier, the 5.1 surround system has been much more competitive.

The Donostiarra company Auralia has developed a new audio concept: eSC. This product reproduces the auditory experience that is felt in a cinema room in a regular headset. With the success and diffusion of the 5.1 system, Auralia aims to offer new opportunities to the technology of the audiovisual house through a simple adaptation. 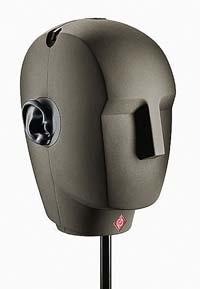 In the ears a head with microphones of any direction is used to record the holophonics.
-

The surround sound obtained in commercial rooms or as Home Cinema requires a total of six well-located speakers. But the enveloping effect of audio is totally lost when you want to watch a movie outside of these supports. In the case of home television or computer, for example, it can be heard at most in stereo, although current commercial DVDs retain system 5.1.

eSC is a software system that adapts to any TV, video game, iPod or computer. This innovative software adapts the 6 independent audio signals that contain the DVD to the two outputs, creating the listener the feeling of being immersed in the middle of the six speakers that contains the 5.1 system through the conventional headphones. That is, a total enveloping effect occurs with two simple audio signals for each ear. For this purpose, virtual sound synthesis techniques are used.

The auditory phenomena that occur in the transmission, transmission and reception of sound are regenerated by computers in the virtual sound synthesis. As the human ear has only two channels, for each channel a hybrid model is formed with an optimized virtual location.

These phenomena are subsequently adapted to spatial characteristics. That is to say, the previous model features are added to the anterior and posterior virtual space of the listener through an independent geometric treatment. It is a complex process to get a contour feeling through conventional headphones, but the result is worth it. With a simple adapter, without changing the TV or the home computer, we will soon be able to immerse ourselves in the three dimensions of the sound.

(Photo: From archive)
The ear of some species of owls is much more acute than the human, due to the asymmetric location of the ears. The inner ear of the right is placed above the left, forming a different angle. Thanks to this, in addition to the horizontal movement of sound, which is perceived by humans, owls can perceive perfectly the vertical movement of sound. They can locate exactly the origin of any sound, since this difference of a few millimeters between the ears offers owls immediate direction information. Various research has shown that, without vision, in total darkness, fungi with asymmetric ears can hunt thanks to their privileged ear. However, the species of owls with symmetric ears find it impossible to hunt in absolute darkness.
Urruzola Arrate, Manex
Services Services Services
245 245
2008 2008 2008 2008 2008
Information about information
032 032 032 032
Images/Sounds
Article Article Article
Services Services Services