So far it has been considered that the intensity of summer monsoons in the Indian Ocean is related to glaciations. However, an Anglo-American group has shown that 350,000 years have passed since this relationship broke.

Two uses predominate in the summer monsoon. On the one hand, the warming of the Asian continent creates a low pressure zone over the Indian Ocean on land and a high pressure zone in the ocean. This situation causes the circulation of monsoons to begin. On the other hand, the heat released by evaporation that occurs in the Indian subtropical ocean warms the atmosphere. As a result, rainfall in Asia increases monsoon intensity.

The monsoons take material from the deserts of the area, take it to the sea of Western Arabia and leave it there, causing the rise of cold waters with rich ingredients. Therefore, in the aforementioned sea there is a great biological productivity.

Samples of sediments extracted in this sea by drilling are valuable elements for the study of the intensity of the monsoons of yesteryear.

Until now, the cyclical presence of the ice sheet on the Tibetan plateau suggested that part of the solar radiation was reflected and therefore decreased monsoon intensity. But, according to the study of Clemens and his colleagues in the aforementioned research team, in the last 350,000 years they have been times of violent monsoons. 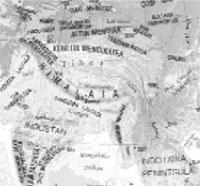