The autonomy of electric vehicles, the battery charging time or the cost are characteristics that are on everyone's lips. But what about vehicle reliability? What factors can cause the breakdown and exit of an electric vehicle? Among other things, the propulsion system of an electric vehicle faces an unknown problem for the general public, but the common tension is well known by specialists. 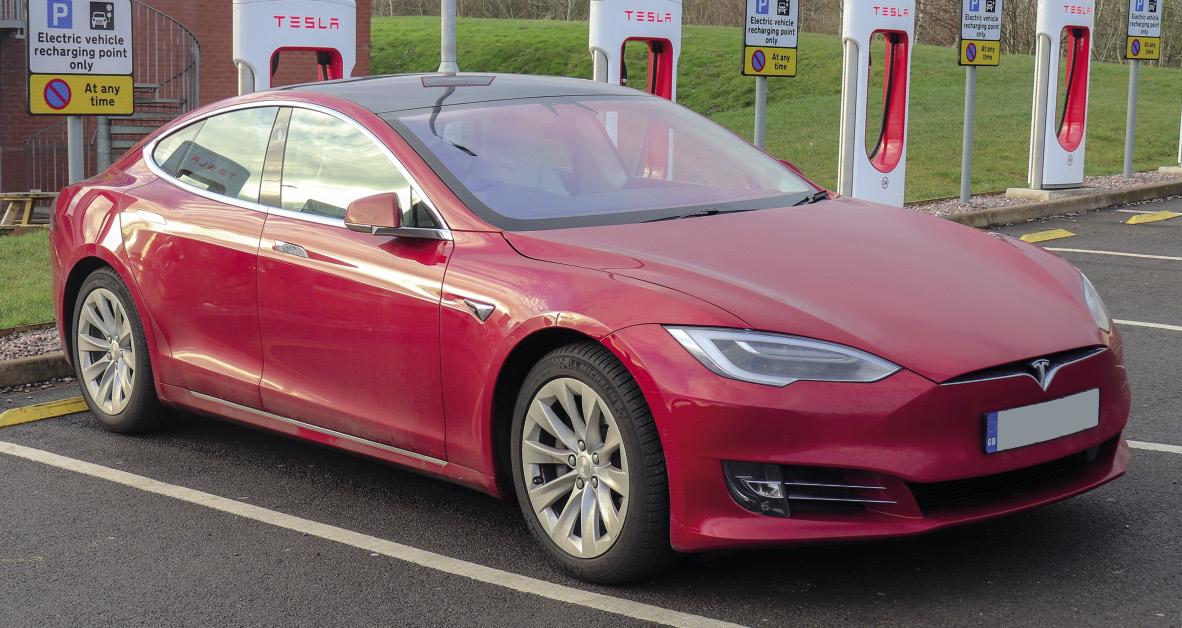 The potential of electric vehicles to reduce pollution in densely populated urban areas is well known. However, in recent years there has been a huge debate about the carbon footprint of electric vehicles. Although electric vehicles are much more efficient than internal combustion engines, it should be borne in mind that part of the electrical energy required for the recharging of electric vehicles is produced from fossil fuels. In addition, the manufacture of batteries is a major energy penalty.

These doubts are resolved with the latest investigations. For example, the meta-analysis published in 2020 by Ivanova and his collaborators in the journal Environmental Research Letters shows that electric vehicles are essential to the achievement of the objectives of the Paris Agreement. Kawamoto and its collaborators conducted an evaluation of the entire life cycle of electric vehicles (LCA, Life-Cycle Assestment) in 20191. As far as the European context is concerned, electric vehicles were found to improve emission data for petrol vehicles after running an average distance of 76,545 km and diesel at 109,415 km. Therefore, from an environmental point of view, it is necessary to maximise the reliability of electric vehicles, identifying possible failure mechanisms in the propulsion system and looking for solutions to maximize their life cycle. 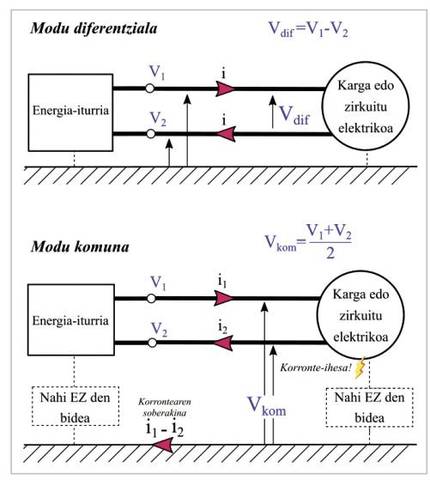 Figure . The differential mode is the desired mode of operation in any circuit. However, the reality is that when voltage components appear in a common way, part of the current escapes through undesired routes. [Image made by authors].

Electrical and electronic systems are designed to operate by applying a voltage difference between two or more input terminals (Figure 1). Ideally, when a voltage difference (Vdif) is established at the entrance, the current will move from the highest voltage terminal (V1) to the lowest voltage terminal (V2). This mode of operation is called differential mode and is the desired operation in electrical circuits. However, the reality is different, as a common tension (Vkom) is often established that has no null value, along with the differential tension necessarily (Figure 1). So things, a part of the current that enters the most stressed terminal, for example, can come back from the ground connection, finds another way back to the power source. It's what's known as leakage current. Therefore, this trend which should be invaluable, in practice, is not so small.

To bring this phenomenon closer to the context of electric motors, it is first necessary to define the main components of engines (Figure 2). The stator is the fixed part of the machine, which has a winding that connects to the terminals that feed the machine. The stator surrounds the rotor. The latter is the movable part of the engine and is linked to the shaft. The shaft is supported on the bearings so that the rotor has little friction. Rotor motion is produced by the interaction between flows and currents generated in rotor and stator. All components are collected by a metal housing. 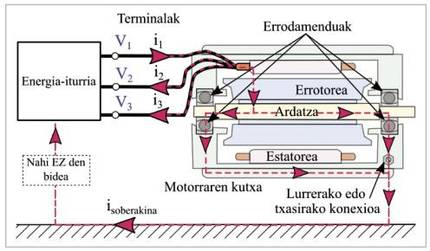 Figure . When a three-phase electric motor is operated, the entire current should run through the engine phases. However, part of the current is downloaded from the machine bearings if the engine is applied a common voltage. [Image made by authors].

Industrial electric machines usually act by connecting them directly to the power grid (Figure 3). In this configuration, the voltage in common mode (Vkom) is zero if the stresses at the engine input are fully balanced, i.e. when the sum of the input voltage is zero. In this case the current will only circulate through the input terminals.

Conversely, in electric vehicles, a power converter (inverter) is connected between the power supply (batteries) and the electric motor. Since the battery voltage is continuous, the power converter function consists of adjusting the frequency and amplitude of the alternating voltage set in the engine according to the rotational speed of the rotor and the power (time) to be implemented. 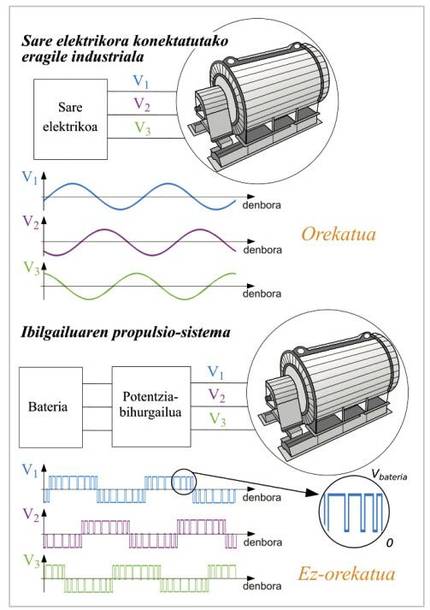 Figure . Motors fed directly with the electrical network have sinusoidal stresses in terminals, generally balanced. Conversely, the tensions established in the terminals have a pulse form when power converters are used. [Image made by authors].

Power converters are formed by semiconductor devices operating as switches (Figures 3 and 4). Adapting the amplitude and frequency of output voltages is achieved by switching these switches with a high frequency (usually between 5 kHz and 20 kHz) and controlling the width of the generated pulses. Switched systems are used for high efficiency. In return, instantaneous tensions are unbalanced and a common high frequency voltage is established at the engine terminals. Thus, much of the current generated by the common mode will be downloaded from the bearings (Figure 2).

In contrast to industrial engines, in electric vehicles it is not possible to install a ground connection that allows to unload the current generated by the common mode. Therefore, the common mode can cause problems in the electrical and electronic components of the vehicle. In fact, electromagnetic interference (EMI) is a lot due to common mode. These may affect other subsystems of the electric vehicle, such as control units (ECU) and communications between them.

As far as vehicle reliability is concerned, problems may also arise, as shown in Figure 5. On the one hand, the large tension variations generated make it possible to deteriorate the isolation of the stator winding. As the isolation is lost, there is a greater chance of shunting the windings, thus increasing the chances of the engine breaking. In addition, the leakage currents mentioned above affect the engine bearings. The latter are mainly responsible for the generation of faults in electric motors. 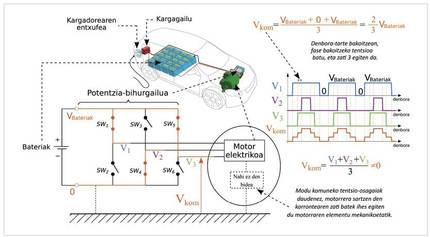 Figure . Triphasic inverter switches may have eight possible combinations. Each combination or switching state has a common tension. The image shows an example of a switching sequence. The status of switches of the same phase should be complementary to avoid a short circuit in the power supply. So if the top switch is on, the bottom switch will be off and vice versa. A certain level of voltage per phase (, and ) is generated in each switching state. The example clearly shows that the tension in common mode is not null, but has pyramidal shape. [Image made by authors].

How to reduce common tension problems?

In recent decades, the scientific community and industry have worked together to find solutions to this problem of electric motors. In this sense, solutions commonly used to reduce common mode effects can be classified into two main families (Figure 6): solutions that isolate the bearings from the leakage currents and direct the leakage currents to the vehicle chassis. 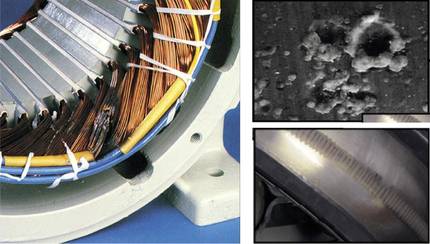 Figure . Currents escaping the tension in a common way can burn the isolation of the stator coil and cause craters and striations in the bearings. [Image made by authors].

Some of these solutions have now been discarded because of their unfeasibility (Faraday shielding, among others). However, other solutions have been widely accepted. For example, the Swedish multinational company SKF is a leader in the electric machine bearing industry and proposes the use of hybrid bearings to minimise problems in electric vehicles. In contrast, the EST company, the world leader in solutions to mitigate the damage caused by parasitic electric shocks on rotary and mobile surfaces, has patented the AEGIS axis grounding ring as a solution to download currents to the ground or vehicle chassis.

Although it has been shown that some of these solutions are effective, their aim is to reduce the effects produced by stress in a common way. Another possible option is to avoid these effects from the source. How? [Radical correction of the problem]. On the one hand, specific filters have been proposed to block the voltage in a common way and prevent its extension to other components of the propulsion system. On the other hand, new switching sequences have been proposed for the control of topologies of power converters that reduce or completely eliminate voltage in a common way (Figure 7) and devices. In the case of an electric vehicle, the last two options are the most attractive, as there is no grounding in the vehicles. Aware of its potential, the scientific community has been investigating alternatives in recent years.

After a thorough analysis of the problem, it can be concluded that electric vehicle users can continue to focus on the characteristics of speed, efficiency, autonomy, etc., due to the diversity of solutions that exist for a common problem. However, the work of scientists continues to seek cheaper and more effective solutions to deal with problems related to the common way. In addition, the standards and regulations to be met by vehicle manufacturers are very strict, thus ensuring the quality requirements for vehicle robustness and safety.

1. In addition to the operation of the vehicle, variables such as material exploitation, vehicle manufacture, electric mix, driving distances, maintenance, recycling, etc. were taken into account to determine the emissions generated throughout its life cycle.

Figure . An example of one of the solutions studied in the APERT research group of the UfV. This inverter is specially designed to eliminate the voltage in a common way thanks to its ancillary elements (the vehicle batteries are connected to the entrance and the engine at the exit). [Image made by authors].

2. Other applications using electric motors or generators require the use of power converters as variable speed industrial agents and wind mills.