The Mediterranean: salt as a whistle of history

At the bottom of the Mediterranean have been found layers of salt three kilometers thick that have allowed to unravel the geological history of this famous sea. With the repeated closure and opening of the port of Gibraltar, inland marine waters precipitated large amounts of salt by evaporation. 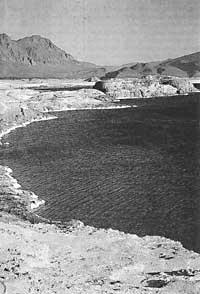 At the end of the tertiary era, between 6.5 million years ago and 5 million years (in the geological period Messenic) came the phenomenon called salinity crisis by geologists. At the bottom of the sea, about 3,000 kilometers from west to east and 1,000 kilometers from north to south, geologists have found salt precipitation that they call evaporites (plaster, anhydrite and brine). In addition, these salt flats are very thick, between 1,200 and 3,500 meters thick. How were these layers of salt formed?

Twenty years ago two explanations were given to clarify this phenomenon. One said that in the Mesínico period the current sea was a desert, a great depression up to 3,000 meters deep. However, according to the other, it was a reservoir up to 500 meters deep and bottom laune, a giant marsh or saline full of water with high concentrations of salt. However, the investigations that have been carried out today allow us to somehow relate these two contradictory hypotheses.

Forty years ago, the structure of the seabed was not well known. It is true that oceanography XVIII. Already in the eighteenth century, but the submarine geology and especially the investigation of sediments, only began at the end of the last century. XX. In the first half of the twentieth century, submarine geology was limited to studying very superficial sedimentary layers. Samples were taken from shallow bottoms or from submarine soil. However, with samples from the Mediterranean coast (Sicily, Algeria, Cyprus, etc.) Deep evaporite deposits were detected in previously flooded lands. However, geologists did not believe that these deposits were a consequence of the geological phenomenon that affected the entire Mediterranean.

After World War II, military and oil companies gave a great boost to oceanographic research. Detailed study of the topography of the Mediterranean background. Between the history of the sea could not be clarified, but they knew the avatars of the depth, the different reservoirs, the relief of each, etc.

In 1861, the oceanographic vessel Chain began to work with its seismic probe. Through the seismic probe, he detected the sediment layers measuring the time the signals emitted in returning after reflection took. In the coastal caves these surveys indicated the existence of thick domes of several kilometers of diameter. How did domes or dome shaped peaks emerge? Were they salinas?

1.966 J.Y. The boats Jean-Charcot and Calypso, at the orders of Cousteau, found again the same domes and repeated the questions we just asked. In addition, the answer not only interests geologists, since many times these structures mean that there is oil. Understanding reason is not difficult. In pre-evaporative conditions the concentration of salts in water increases. Turning water into heavy, poor in oxygen and without movement, there is no possibility to develop life in it. Organisms die and sink. The organic matter so trapped is usually very little degraded and its maintenance allows its transformation into hydrocarbon.

The drilling project at great depths of the seabed began in 1868. The Glomar Challenger had the ability to drill layers of sediment or stones of 1,500 meters thick up to 7,000 meters deep.

In the perforations carried out in 1.970, evaporite sediments were discovered at the bottom of the Mediterranean; anhydride (calcium sulfate), plaster and salt. The evaporites are formed when sea water has a saline concentration of 350 g/liter and precipitate. The column of 1.000 meters of water in the sea sediments layers of different salts up to 20 meters of height. 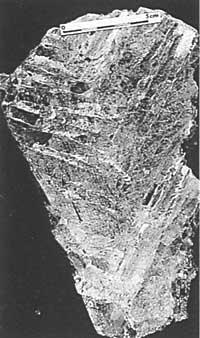 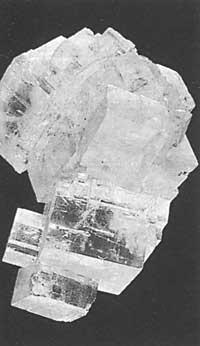 Evaporites. Above is shown the plaster sample of the messenic period. The glass has transverse ribs. Below, brine formed by cubic crystals.

At the end of the aforementioned program of the ship, K.J. Hsü, W.B.F. Ryan and M. B. B. The geologists Cita proposed a hypothesis. Just over six million years ago, the Mediterranean in the east was already isolated from the Indian Ocean, but in the west it was related to the Atlantic Ocean. At that time, the African continental plate moved north and mountain ranges were formed both in the Iberian Peninsula and in northern Morocco.

Little by little, the relationship between the Atlantic Ocean and the Mediterranean was narrowing and the large amounts of water were inaccessible. The dry climate made the 4 million cubic kilometers of water containing the sea disappear in more than 3,000 years. Sedimentation of salts and other materials. For almost a million years, the Mediterranean was just an arid desert; its background depression at 3,000 meters below the level of the Atlantic Ocean.

However, the question is immediate: how is it possible that a column of three kilometers of water in the sea produces evaporite sediments of between 1, 2 and 3 km? To greatly clarify the thickness of sediments, the explanation by geologist Hsü can be the repeated closure and opening of the entrance to depression. The tectonics of the plates allowed the Gibraltar gate to open and close, so that the Atlantic Ocean, along with water, provided salt on a recurring basis. In the end, about five million years ago, the obstacle of Gibraltar was definitively broken and the oceanic waters fell into a precious precipice leaving the Mediterranean flooded.

By 1970, the debate focused on the depth of the messlenic depression and on the types of evaporites. Some consider that the depth of depression was only hundreds of meters and others claim that the Mediterranean has always been flooded.

Regardless of the proposed model, it is clear that the Mediterranean well suffered an era of salinity in the mesínico period, that the communication between the ocean and the sea had fluctuated and that the displacement of the African plate had to do with this process. Although in Sicily and Algeria they are currently on land, the evaporites of the flooded areas of the time have been compared with the evaporites of the cave. In 1776 the ship Glomar Challenger and in 1887 the Glomar Explorer published more data and geologists and oceanographers have achieved a more complete history.

Samples taken under the current layers of salt on land indicate that before the salinity crisis the Mediterranean was open sea. The samples have also left the seabed and ground areas of the Mesinian period. Specific analyses have found forominmal (unicellular animals), cooliths and diatoms (microscopic marine algae). These indicate that in the salinity crisis, on the one hand, a large amount of salt water was introduced and on the other, that in depression water has always been present. The Mediterranean has not, therefore, been desert as announced by geologist Hsü. Layers of such thick evaporites would have been formed by the incorporation of water periodically but relatively frequently. This is the case of the current salinas.

In the samples of the nearest layers, remains of saltwater fauna have been detected and the importance of the contribution of both fluvial and rainwater is appreciated. At the end of the salinity crisis, the dry climate became humid and for five million years the Mediterranean is an open sea.

The thickest salt layers are found in the current caves, according to which six million years ago the general form of depression was similar to the present one.

Seismic studies indicate that the saline layer of the Cave East has a length of up to 3,000 meters and that of the Cave West up to 1,500 meters. These layers have not yet been drilled in favor because it is forbidden. In fact, the salt layers can be covered with hydrocarbon deposits. Technically, at present there are no obstacles to drilling the layers of that depth, but it can not be done against the damage that derives from the runoff of oil to the sea that would take eighty years to renew its waters.

On the other hand, it is observed that not all the evaporites of the Mediterranean background have been generated simultaneously. The wells of the banks were isolated before those of the center. In addition, during the tertiary era the polar cap of the Antarctic became more thick and the level of the oceans decreased. Thus, of course, the Mediterranean Sea was isolated.

The complete scheme is expressed as follows. At the beginning of the Mesinian era (6.5 million years ago), the Mediterranean Sea was connected to the Atlantic Ocean of Gibraltar. Subsequently, the displacement of tectonic plates isolated the sea and, when the ocean level fell, the insulation increased. In addition, the dry and stable climate favored the evaporation of water. Sometimes, due to the high concentration of salts, the evaporites precipitated. In times of salinity crisis, most wells had water, but the wells on the banks could be deserted for many years.

At present, the periodic entry of ocean water to the sea is mainly due to the variation of the ocean level and not to the displacement of the tectonic plate. 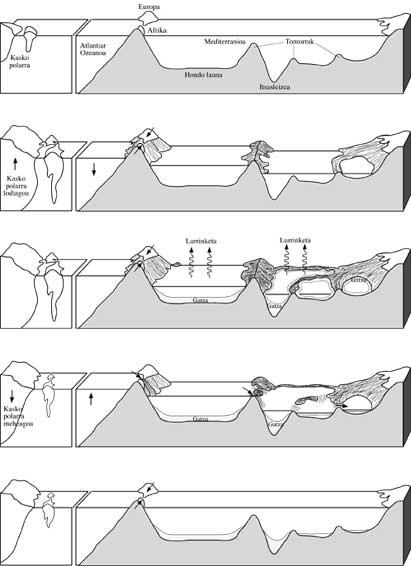 Six and a half million years ago the Mediterranean was connected to the Atlantic Ocean.
Six million years ago the African plate moved to Europe and at the same time the level of the oceans decreased due to the thickening of the polar helmet. Communication from the Atlantic Ocean and the Mediterranean was suspended or almost interrupted.
Most of the water in the depression evaporated due to dry weather. The high concentration of salts in the water caused sedimentation.
The ocean level was raised and the connection with the Mediterranean was established again. The repetition of processes 2, 3 and 4 led to the formation of thick layers of marine bottom.
Five million years ago, the road was definitely free in front of Gibraltar and in the depression of Meditarranio the sea extended to reach the current size.