To see it first you have to separate the edges 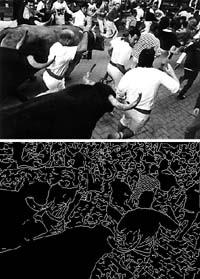 If a robot wants to separate objects from an image, it must first detect the edges of objects. Hence the use of edge detectors in artificial vision. Edurne Barrenetxea, from the Public University of Navarra, has designed a new corner detector.

The operation of the edge detector is simple. An image is taken, passed to the grayscale and inserted into the detector. Once the image is analyzed, the detector returns an image with the dark background and the edges marked in white.

Typically, edge detectors are based on identifying points where there are major changes in the grayscale. In the technique used by Edurne Barrenetxea, however, the edge is a set of pixels with a change higher than estimated with adjacent urinals.

This system can be useful for both industry and medicine. For example, the detector can be adapted for a robot to detect the doors of a building. In medicine it can be used to detect melanomas. From an image of a stain, you can draw its edge and analyze its evolution in several months. If in that time interval the honey edge has moved 3 millimeters, there may be melanoma. This evolution is very difficult for the doctor, but not for computer systems.