Are robots capable of learning?

Why do robots need to learn?

In the day to day we do many activities without just having to think. For example, it seems totally normal for us to enter a room we do not know and walk without touching the objects in that room.

The robot, to help us in real life, must be able to adapt to the environment in which he will work, that is, he must learn to work in it.

In artificial intelligence there are many methods used to learn. The learning method that is intended to be analyzed here is learning through violence, whose name derives from the value called violence. Let's analyze the learning process step by step to understand what violence is.

In order for the robot to adapt its behavior to the environment, it must receive information about it. This is done by sensors: light sensors, contact sensors, artificial vision system, etc.

Once the robot receives information from the environment, it will select and execute one of the actions it can perform. Accordingly, you will receive a data of the suitability of the action.

Once the robot receives information from the environment, it will select and execute one of the actions it can perform (e.g. step forward). Consequently, the robot will receive a data of the suitability of the action. This value is called violence.

It will be positive (award) if the action carried out has led the robot to a more favorable situation (always better with respect to the objective to be achieved) and negative (penalty) if it has left it in worse situation than before the execution of the action. The robot must keep all these experiences in order to decide on future occasions the most convenient action.

Learning is knowing how to decide what action you have to execute at every moment to maximize the violent value that the robot will receive. Suppose we have a simple robot that moves through two wheels and that there is a light source in the environment, that we want the robot to move the light source. It has two light sensors for collecting information from the environment, one to the left and the other to the right. The robot can perform five types of activities: stop, move forward, roll back, turn left and turn right. The sensors distinguish three different situations: the general luminosity measured by the sensor on the left is greater, smaller and the same as that on the right.

Being in these circumstances and able to execute these activities, the robot will begin to move in the environment. The violence it faces will be a great positive if the global luminosity measured in the new situation is higher than the previous step.

Thus, the adaptation between the situation and the action that the robot must learn will be:

A simple algorithm: estimation of the interval

This algorithm is based on statistics, specifically on Bernoulli's probability distribution.

As long as the robot acts on the environment, it will save the information received. To do this, it uses two two-dimensional tables, each corresponding to a couple of states/actions.

Each time you execute an action in the environment you will update both tables, adding in the first the situation and the value of the box corresponding to those actions in 1 no and adding the violence you receive (positive or negative) in the corresponding box of the second table.

With these two tables and using statistical calculations you can get the estimated confidence interval for the probability that, being the robot in a situation, an executed action gets a violent value 1. With this interval, the algorithm will know what action to execute so that the behavior shown by the robot is optimal.

This robot uses the interval estimation algorithm. It moves with two wheels. It has four light sensors for information on the brightness level and five other sensors for detecting objects in the environment. In addition, the robot is surrounded by a circular sensor to detect possible shocks.

All these devices make the robot receive information about the environment in 5 bits.

According to the behavior of the robot, the violent you will receive are:

With all this, the Spanky robot tries not to collide with objects and move towards the light source. Spanky was launched more than 20 times. He was able to learn the best strategy in an interval of 2-10 minutes.

The algorithm seen modifies the behavior of the robot according to the violence received after the action.

There are algorithms for this. The algorithm called Q study is one of them and quite good. The algorithm is called learning Q, as it saves values Q. What do these Q values indicate? The robot is at the t moment and receives the input status i. Somehow he decides to execute the action at that time and gathers violence r.

So things, the robot assumes that it will continue to act with the best strategy and hopes to receive the violent r (1), r (2)... These r(j) you expect to receive later, j = 1..., will be taken into account, but the farther away, the lower the incidence. This is achieved thanks to the discount factor{ Initially, the value of{ will be close to 1 and will be smaller and closer to 0.

Value Q: action utility to in situation i

The Q value indicates the utility of executing an action in a state.

It will save such a value for each pair of states and actions. A table with the experience of the robot will be completed.

The robot will test in the environment and save in its table all the results you receive for later use.

The robot is at a given time in state i and wants to know the usefulness of this situation. What action would you have to take in this situation to be the maximum violence you will receive in the future? This utility will be the value that has the highest value Q action for this situation and will only decide to carry out such action.

Usefulness of the situation i.

With the information we have, we have enough to build an effective learning algorithm. This algorithm continuously updates the Q values of the table. This is his fundamental work, hence the robot derives his behavior. The algorithm will modify the table values as follows: 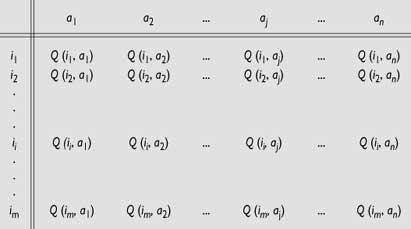 Suppose we are at the time t, the robot looks in state i (t) and executes the action a(t). As a result, it is in an r(t+1) situation and has received a r of violence. Then, the algorithm will go to the Q values table and calculate the U (i (t +1) utility of the new state i(t +1), as indicated above. This utility will be deducted through the{ parameter, to add it to the r(t) violence you just received. However, it has the utility of the action a (t) that you have just executed and saves it in the table where it corresponds for later use. He knows how action has gone into state i, to what extent its execution has been good.

When the robot starts to act in the world, the Q values it saves in the table are not very significant, but the author of this algorithm, Watkins, showed that the algorithm quickly approaches the real values Q. Once converged, the robot has learned to move around that environment and will always act on the best strategy. The algorithm is dynamic and the Q values of the table are constantly changing to adapt to a potentially variable environment.

What are you thinking? Can the complexity of computability be enormous? Well, yes! So it is. What you can't...

The problem of computability complexity is enormous. In the case of the previous Spanky robot, the input state is expressed in 5 bits, that is, it is able to differentiate 25 = 32 different states. Of course, Spanky is just a toy robot. In practice, the robot will receive input status information through more bits and will be able to execute more different actions. How large should the algorithm be used? Both in space and time, the combination is exploited.

This algorithm requires all situations to be defined and, as we have seen, the required space is huge. Unfortunately it is not the only problem.

Problems of generalization of entry states

How can the robot know that one situation is similar to another? If you could know it, to know how to act in new situations you would use the experience of similar situations to create similar actions. 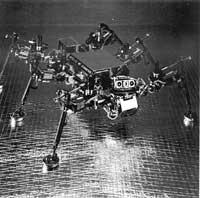 Are we on the right track? There are many problems. Of course. But now art rehearsals have been very positive and we have seen that robots can become good students. Just a little more work is needed.

Great! The problem of generalization can be overcome. However, should all situations be kept? The problem of the combinational explosion is still there!

Statistical groups have also been used to overcome it. However, much remains to be done.

Are we on the right track?

What do you think? Do you think there are things? Although we have not mentioned it yet, there is a problem in all this.

In all the algorithms described we have assumed that the robot is in a certain state and that once an action is performed, without taking into account anything else, we know in what situation will be found at the next moment, that is, that the transition between states is the Markovian. On the contrary, we have never taken into account the situation we are in before we are in the current situation and this can be important.

Suppose the robot is fast and goes forward at full speed. At any given time, due to some obstacle at the front, the decision will be made to turn right. In what situation is it after turning? According to our algorithm, we say that the robot describes the right angle, but we know it is not. The robots used so far are quite slow and the problem has not been very obvious. But if we continue like this, we will realize that we go wrong, because what the robot does and what he believes it does can be very different.

There are many problems. Of course. But so far the trials have been very positive and we have seen that robots can become good students. Just a little more work is needed. 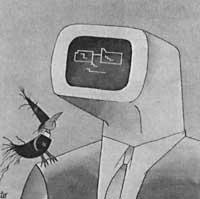