Photovoltaic: proud of sales, in efficiency

Photovoltaic is a young technology that grows at high speed. The spectacular growth in sales in recent years has generated significant changes in global markets. On the contrary, the efficiency of photovoltaic systems has improved little in the last decade. Cost reduction, grant policies and profit margins have played a greater role in business success than research line results. Also speculations.
Photovoltaic: proud of sales, in efficiency
01/07/2011 | Urruzola Arrate, Manex | Elhuyar Zientzia Komunikazioa

The sum of all photovoltaic cells produced in the world last year would generate 27 gigawatts. It is the equivalent power of about 30 nuclear power plants. Compared to 2009 production, the increase was 120%. In view of the evolution of recent years, in the world there is no other sector that grows so fast. And this rate of growth has been compared to the rise of computer technology in the early years.

Thus, solar electricity is taking great steps to achieve a significant level of energy management. And it seems that this trend will continue in the future. For example, in 2008 only 0.06% of world electricity had photovoltaic origin. Well, the director of the International Energy Agency (IEA), Nobuo Tanaka, said that by 2050 20% or 25% of the world electricity could be solar. It recognizes that EEA has dismissed the potential of renewables over the years. "It is true that we have been very conservative about the potential of renewables, but now we are getting greener," says Tanaka.

Federico Recart, researcher at the Institute of Microelectronics Technology (TIM) and professor at UPV, believes that photovoltaic technology will be a strategic sector in the energy landscape of the future. "The low efficiency of each solar panel, which can be around 150 watts per square meter, does not mean that photovoltaic systems can provide little energy. The key is in quantity." And the figures are increasing. For example, the photovoltaic power installed in Europe in 2010 surpassed wind and hydroelectric power for the first time.

However, against the growth of the photovoltaic market in production and sales, the efficiency of its technology has not improved so much in recent years.

At the base of the plates there may be several materials, but if you want to highlight an example, the case of crystalline silicon cells is significant. This type represents 86% of the world's cells. The research carried out in raw materials and production processes has allowed to improve the efficiency of these cells by around 3% in the last ten years, specifically from 15% to 18% in the most frequent cells. "Although the improvement is important, it is clear that this increase not only does not explain the takeoff of sales," says Recart.

But there is room for improvement. As Recarte explains, "with ideal materials -- and silicon close to this ideal material -- the thermodynamic limit of the efficiency of this type of cells is 41%". However, according to the European Association of Photovoltaic Industry (EPIA), the efficiency of crystalline silicon cells will not exceed 23% by 2020. Although it is an improvement, no revolution is expected in that sense.

With the aim of approaching this 41% limit, high concentration technology has been applied in monocrystalline silicon cells. It is a high precision technology, which improves its efficiency up to 28%, but continues to increase its price considerably and has not received satisfactory response in the market. 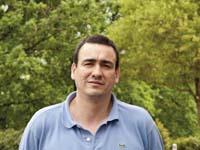 Federico Recart is a PhD in engineering, professor at the UPV and researcher at the Institute of Microelectronics Technology (TIM). This organization conducts research in the field of photovoltaic to later transfer the results and applications to the industrial field. Ed. : Manex Urruzola.

Other technologies such as cadmium teluro cells have also advanced. Although in recent years their efficiency has improved slightly above 3%, they are still less efficient than those of crystalline silicon. They are cheaper, but only 5% of the world market share has been reached by this type of cells.

The very best results have actually been given in cells with multiple joints. They are usually gallium arsenide and applying high concentration technology in this type of cells, efficiency has reached up to 40%. They also have a significant improvement margin: "In theory, the efficiency limit with ideal materials in multi-joint cells is 86.6%," says Recart. However, these systems are currently very expensive and the price quality ratio is not worth it for commercial uses. Therefore, they have not had any success in the market.

Although research is being carried out with diverse materials, the photovoltaic business is closely linked to silicon. About 95% of the solar cells that formed last year had silicon as the main raw material.

10 years ago, the silicon used for the manufacture of solar panels came mainly from the surpluses of the microelectronics industry. But things have changed: "When they saw that there was business in the field of photovoltaic, new manufacturers and new processes appeared," says Recart. In addition to technological advances, the TIME researcher mentions another important factor. The scales have gone up a lot: a decade ago a factory that could produce 10 megawatts a year was large, but today they can generate 500 megawatts a year. This has reduced silicon production. And that's one of the keys to increased sales.

But the drop in PV prices is also due to lower production wages, more flexible occupational risk prevention, softer taxes... "Production has moved to cheap countries," explains Recart. In fact, until a few years ago Japan, the United States, Spain and Germany have been the world's leading producers. But in a short time there have been great changes. Asia has achieved absolute market share leadership, accounting for 82% of photovoltaic cell production in Asia. Three or four years ago, a country that didn't even appear on sales lists, China, created half of the world's photovoltaic cells in 2010.

Basque companies dedicated to the sale of machinery for the production of photovoltaic technology - such as Gorosabel or Mondragon Assembly, among others - currently have their main customers in China and India. 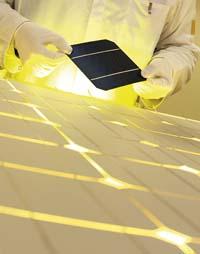 Although research is being carried out with diverse materials, the photovoltaic business is closely linked to silicon. Ed. : © iStockphoto.com/Gerenme.

Thus, eight of the top ten companies in the ranking of the world's leading cellular producers are from China, Taiwan and Japan. In this top only appears an American and German company. However, large companies headquartered in Western countries are directing their production to China and India, driven by cost competitiveness.

However, to understand the revolution in the sales of photovoltaic technology there are more threads to consider. One of them is the demand. And the buyers of the photovoltaic market are fully quoted: The European Union, the United States of America and Japan are the customers that bring together virtually the entire world activity, with Germany by far the world leader in the number of plates purchased and installed. About half of the world's photovoltaic plates are installed in Germany.

Therefore, photovoltaic energy is mostly consumed by rich countries. In other words, demand is based on policies of certain countries. In particular, price policies established through subsidies. "The subsidies granted by these client states have ignited the fire of production," explains Recarte. "Sometimes these subsidies have been excessive and have encouraged speculation." In 2008, for example, when owners of photovoltaic installations were paid 45 cents per kilowatt hour, the photovoltaic power installed in the country increased by 600% in a year. Heikki Mesa, an energy and climate change expert, explains this: "Developers installed large photovoltaic parks, much cheaper than private house panel installations, knowing they would charge bonuses for 25 years. But instead of paying these bonuses for the State, consumers paid them through our electricity rate." Recart adds: "In addition, in short, much of these bonuses went directly to producers of plates, Chinese companies."

But after a year the opposite happened: "The Spanish market was a total drought in 2009," says Recarte. In fact, by decree pricing, the Spanish government reduced the kilowatt hour price of photovoltaic from 45 to 32 cents. The fact of the importance of public subsidies in this game is that the price of electricity consumers pay on their usual bill is about 12 cents per kilowatt/hour.

But beyond the price paid for electricity, in the current energy situation -- growing demand, and pollution of the most exploited sources and limited reserves, on the one hand -- renewable sources have become essential. 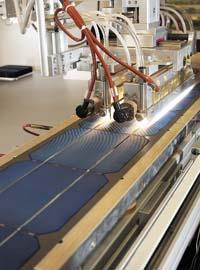 At this juncture, photovoltaic plates have important advantages: they are silent, clean and long lasting, which do not exhaust additional resources to those of the sun for its operation. But not everything is gold. These plates require high energy consumption. In fact, a photovoltaic plate should work for two years to return the energy needed for its production. "The shelf life of these plates is over 25 years, so it's not for that," explains Recarte. However, in order to compete with fossil fuels, photovoltaic energy must improve its efficiency and reduce production costs.

The enormous growth experienced by the photovoltaic market in recent years has made predictions for the future not easy. Not in the short term. According to the figures handled by the production companies, the sum of all solar cells that will occur in 2011 could generate between 50 and 65 gigawatts. This is the power that around 60 nuclear power plants can supply.

But it remains to be seen whether all these solar cells will actually be produced. And if we do, the key will be if all these copies can then be marketed. In fact, if sales are lower than expected, production will be forced to decline. And this will not be because no new production lines will be built. The proliferation of increasingly competitive factors is unstoppable. On the contrary, the oldest factory--the least competitive factory--if production and sales forecasts diminish, unable to compete with the most recent production lines, without closing, would have losses.

Therefore, if the sales forecasts of the global photovoltaic market for 2011 are not met -- and this would not be surprising the turbulence that has occurred in Europe following the price decrees of recent years -- solar cell manufacturers would receive enormous pressure to further reduce their costs. That is, in the coming months large variations in the photovoltaic market are also expected. But in the sector nobody expected more. Because photovoltaic is a young technology that grows at high speed.

-
The basic elements of photovoltaic plates are photovoltaic cells. They absorb the photons from the light and emit the electrons, so that working in series create electric current in the panels.
Solar cell production in 2010 doubled the previous year. The producers of the sector consider that in 2011 will happen a bit more.
The line graph shows the best efficiencies of solar cells obtained in the last 35 years in different laboratories. The best results have been obtained by applying high concentration technology in multijoint cells. However, these systems remain expensive and have not achieved any success in the market. The most common in photovoltaic plates are by far crystalline silicon cells. They can be monocrystalline or multicrystalline. Monocrystalline silicon cells are more efficient but more expensive. Monocrystalline silicon cells, for greater efficiency, can be applied with high concentration technology, but this technology is not cheap and has not received satisfactory response in the market for the moment. On the other hand, cadmium teluro cells have less efficiency and better price than all previous ones, but have reached a low market share.
The production of solar cells is dominated by Asia, and the Chinese occupy the first place. Customers come mostly from Europe, with Germany by far the world's leading customer. 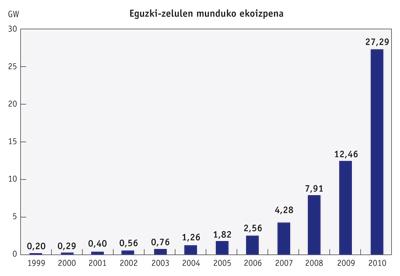 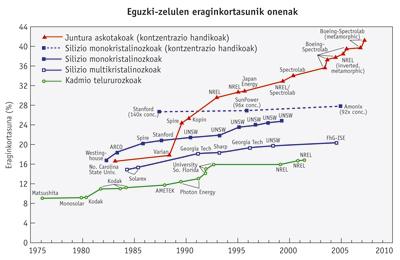