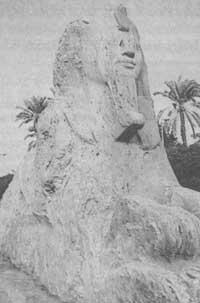 Many ancient monuments have suffered greater damage in recent years as a result of acid rain than for thousands of years.

The phenomenon of acid rain and its consequences are increasingly important in recent years. As the level of pollution increases, this complex problem has uncontrollable or uncontrollable consequences for our world, although often reversible. There is no simple solution, but it is necessary and urgent to act before it is too late or, unfortunately, even late.

On many occasions it has been spoken and written about the impact of acid rain on nature (forests,...). On this occasion we will talk about a curious influence: what is done to stone monuments, citing some illustrative examples. But first let's see what acid rain is.

What is acid rain?

Due to the CO2 present in the atmosphere, rain is itself slightly acidic. The sources of CO2 or carbon dioxide are natural and anthropogenic (degradation of organic matter, combustion,...). When dissolved in water the following reaction occurs:

On the other hand, in industrial and urban areas other acid gases are generated, the most important are sulfur and nitrogen oxides, with the greatest pollutants being SO2 (sulfur dioxide) and NOx (nitrogen oxides (IV) and (II)). The natural source of SO2 is the oxidation of SH2 (biogenic source) and the anthropogenic source is, above all, combustion, being the importance of both similar sources. As for NOx oxides, although they contain a natural source, the most important is anthropogenic (especially combustion).

Sulfur dioxide (SO2) can be oxidized to sulfur oxide (VI) (SO3), a reaction that occurs thanks to oxygen and ozone present in the air and catalyzed by certain metallic substances present in the air polluting particles. By dissolving sulfur trioxide (or sulfur oxide) in water, it can be transformed into sulfuric acid by the reaction:

Rain pH depends on the concentration of SO3 (inversely proportional), and occurs mainly in high-traffic urban areas and industrial areas, as mentioned above. The pH of the air changes when it rains. Initially the SO3 concentration is maximum (lower pH). The pH=3 value has been measured, which represents a 100% increase in the concentration of protons compared to normal rain.

Similar reactions can be written for nitrogen oxides, but as explained below, the biggest impact on stone monuments is H2SO4.

To finish this entry you can say that the problem of acid deposition does not only appear in rain. At present two parts are distinguished: on the one hand, the dry deposition, that is, particles and gases (aerosols, metals, SO4, SO2,...) and on the other hand, the wet deposition, in which in addition to introduced snow, dew, fog and hail. The influence of the latter is not slow, since in the clouds pH = 1 has been measured.

With what materials have the monuments been built?

The acid rain caused great damage to its monuments.

The most commonly used rocks are marble, limestone, sandstone and granite.

Marble is a limestone formed by crystalline calcite, thermodynamically stable mineral form. Marble is a metamorphic stone that, at high temperatures and pressures, undergoes a process of recrystallization becoming a sedimentary rock (called limestone). Chemically, marble and limestone are the same, but morphologically they differ in the measure and porosity of the crystals. Limestone crystals are smaller, so marble is more porous.

Sandstone is used more for building than for monuments. This stone is a sedimentary stone formed by sands. Sedimentation of these grains of sand can occur in quartz rock or limestone.

Granite is mainly composed of three minerals: quartz, mica and feldspar. Granite grains are generally quite large and their porosity is very small, so this material is often used to protect the lower parts of buildings from moisture.

Influence of acid rain on stones

The most vulnerable monuments due to acid rain are those of limestone: marble, limestone and limestone sandstone. Acid rain does not affect pure sandstones or granites.

The reaction between limestone and acid rain can be expressed in a simplified way as:

The mechanisms that control the dissolution of calcite depend on certain conditions: pH, hydrodynamic flow, etc. The most interesting range of pH in this topic is 4-6, controlled by transportation and surface kinetics.

It should be noted that the damage caused by the chemical dissolution of calcium carbonate is above all a superficial phenomenon. Therefore, the reliefs worked on the surfaces can be severely damaged by the superficial dissolution, not affecting the lower structure of the marble.

The problem of the deterioration of the monuments is not only the dissolution of the calcite. The above equation shows that calcium carbonate in stones reacts with the appearance of calcium sulfate. The crystallizable salt dihydrate compound is: CaSO4. 2 H2O (plaster). Plaster is quite soluble in water. Therefore, it only accumulates on surfaces that do not have direct water flow and have reacted.

Therefore, limestone buildings and marble states have a plaster layer in rain-protected areas. Due to contaminated air (dust, coal particles,...) this layer of plaster is blackened. After years in this area, limestone has a marked black and white appearance in areas where rain regularly cleans plaster and black in areas where rain cannot clean it, where the dark layer of plaster has glued a dry deposition.

As mentioned above, acid rain does not react on sandy and granitic surfaces. However, the dry deposition is glued creating a uniform black color.

The monuments of our village are also in danger of acid rain, especially on the coast. San Telmo Museum in San Sebastian.

Soluble sulfate and nitrate salts (generated in the reaction between acid rain and limestone) are dissolved in the same rainwater. This solution is absorbed by the stone by a capillary mechanism. When the stone dries these salts crystallize in this porous system. The pressure generated in this process is enough to mechanically break the matrix of the stone. Therefore, the porosity of a stone controls the amount of solution that can be internalized and, ultimately, the duration of the same. The damage caused by this mechanical action can be more serious than the simple chemical solution of the stone.

The Schenectady Town Hall (N.Y.), a historic building, was built in 1930 with the best marble in Vermont (equivalent to Carrara marble in Italy). It has fallen almost by acid rain. The structure of the building has weakened due to marble plaster.

In Beijing (China) there are 500 year old marble monuments that tell the history of the empire. Until 40 years ago the inscriptions could be read and today they cannot be read. This means that the damage has occurred especially in recent years.

In the marble columns of the Roman emperors Marcus Aurelius and Traianus you can observe a curious phenomenon, as mentioned above. The bas-reliefs treated in the columns represent the conquests of these emperors. In some places, these columns directly support the flow of rainwater and the damage described varies greatly depending on the factors that control the chemical solution of marble. Elsewhere, due to the protection of the surrounding buildings, the surface remains in good condition, although the column has been built 1800 years in advance.

The deterioration of limestone occurs mainly by two mechanisms.

The first mechanism is important when it comes to preserving surface details in sculptures. The second mechanism, however, can have a great influence on the structural deterioration of the stone. It is difficult to distinguish the influence of each mechanism on the deterioration of a state or monument.