Spatial structures: A Basque company among the best

After the Seoul Olympics, the slogan "Barcelona 92" appears almost every day in audiovisual media. Therefore, Barcelona is preparing for the Olympics. One of the most famous buildings under construction is the "Palau d'exports Sant Jordi". The covering of this building, designed by the Japanese architect Arata Isozaki, has been awarded to a Basque company after a tough competition with the best companies in the world. This company, specifically ORONA, has been known to date for the construction of elevators. With the aim of knowing the other unknown facet of this company, we approached it with Benintze Arbide and Jose Luis Azkue.

Last April, the General Assembly held the Act of this company in 1987. The ORONA cooperative is part of the Regional Group ORBIDE, whose financial entity is Caja Laboral Popular.

ORONA's activity is Elevation, Escalators and Spatial Structures. The technology used is of high level, both in products and in means of manufacture.

But this will not be the only spectacular work. There are the Seville Exhibition and the New Congress Centre, the San Pablo Sports Centre in Seville, etc.

The budget of this building, which will accommodate 17,000 people seated, amounts to 5,818 million pesetas. Of these, approximately 1 billion will be needed for ORONA to build the roof structure.

The structure has a length of 127.87 m, a width of 105.60 m and a height of 45 m. It occupies a total surface area of 13,462 m 2. It is based on 60 circular supports and only transmits vertical loads to the concrete structure. The supports are joined by pairs using lintels beams, so that they work as rigid porticos, giving them stability to the wind and steam. 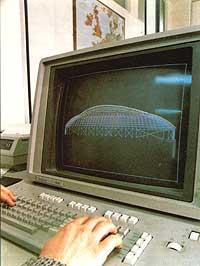 The main structure consists of a double layer spatial network. The average size of the bars is 3.6 m and the distance between the two layers of the network is 2.5 m.

The aspect of the structure leads the forces towards concrete environments. Therefore, in the early stages of calculation, the aim was to concentrate the forces on two pairs of rings, one on the transition edge that delimits the central dome and the other on the outside. The rings have been made with continuous curved tubes and welded 406 and 508 mm diameter respectively. Radial welded tube nerves have also been designed to join the outer and inner rings in the four corners of the cover.

Through these rings and nerves the most important forces of the deck are driven to the desired place. The structure is completed with a special screwed mesh. This network is formed following the ORTZ structural system and consists of pipes (such as force transmission elements) and spheres (such as joints).

As for the diameter and thickness of the pipe wall, the changes are evident (see table). 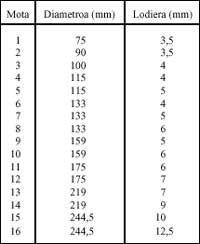 The most resistant elements of the network can withstand an axial force of 200 tons. If so many dimensions have been used in bars or spheres, it is because in its manufacture automatic and computerized means are used, that is, CAD/CAM systems.

The structure is on the ground. Bars and covers are mounted on it. Under the central dome, although not visible, there are hydraulic jacks and control and computer systems that govern them.

The manufacture of bars and spheres has been made in ORONA. To do this, the numerical control machine receives the information directly from the computer. In this way, the operator does not participate in fixing the manufacturing parameters, a flexible system is achieved that minimizes the probability of error.

This 950 ton structure has another very outstanding feature in ORONA, the narrow dimensional tolerance in the manufacture of bars and spheres. In the case of bars it has been 0.5 mm and in the case of spheres 0.1 mm. These margins of error are totally abnormal in the world of structures, but it has allowed to obtain such a complex geometric image.

Once the structure is designed and the parts are manufactured, the assembly is carried out. There are many ways to mount, but this very giant and curious structure is mounted with a spectacular system. The name of this system is "Pantadome" and M. Kawaguchi is the designer. As to see better than to say, between December/January will begin assembly and television cameras will not miss. Therefore, it can happen that while you are reading this article you can publicize the montage on TV.

However, the three photos from the previous page can help us to make a simple explanation of this system.

Bars and spheres need special layers of primer and paint to avoid oxidation problems. Since ORONA we have been told that they have had to pass very strict controls in this field.

Finally, we must say that: That ORONA has presented itself to this project with another company, DRAGADOS Y IES, through the temporary company DRAGORONA. DRAGADOS Y CONSTRUCCIONES has executed the lower or concrete part of the sports palace.

At the beginning of this article it has been said that ORONA had to compete strongly with different companies. In particular, a German and a Japanese company competed. Each observed the technical errors or impediments of the other and there were political pressures.

However, this Basque company was clear that in this project, along with the economic interest, there was also the most recognized prestige.

The fame acquired in Barcelona has facilitated its presentation elsewhere in the world. In Arabia, for example, they will have the opportunity to build several buildings. In Spain unique structures are also being developed, always within the space sphere.