Drones from the battlefield to the classroom

Warm morning on the beach of Ondarreta. A relatively large group of young people dressed in a yellowish, green petite on the sand, is fixed in passers-by. They have something in their hands, but can't be detected. The set of children opens up and unveil their central apparatus. It gives a spider with central white body and four legs or arms that leave it. Suddenly the arms of the feet begin to rotate, therefore the wings, and the storage goes up. It is a drone, a flying device without a driver. 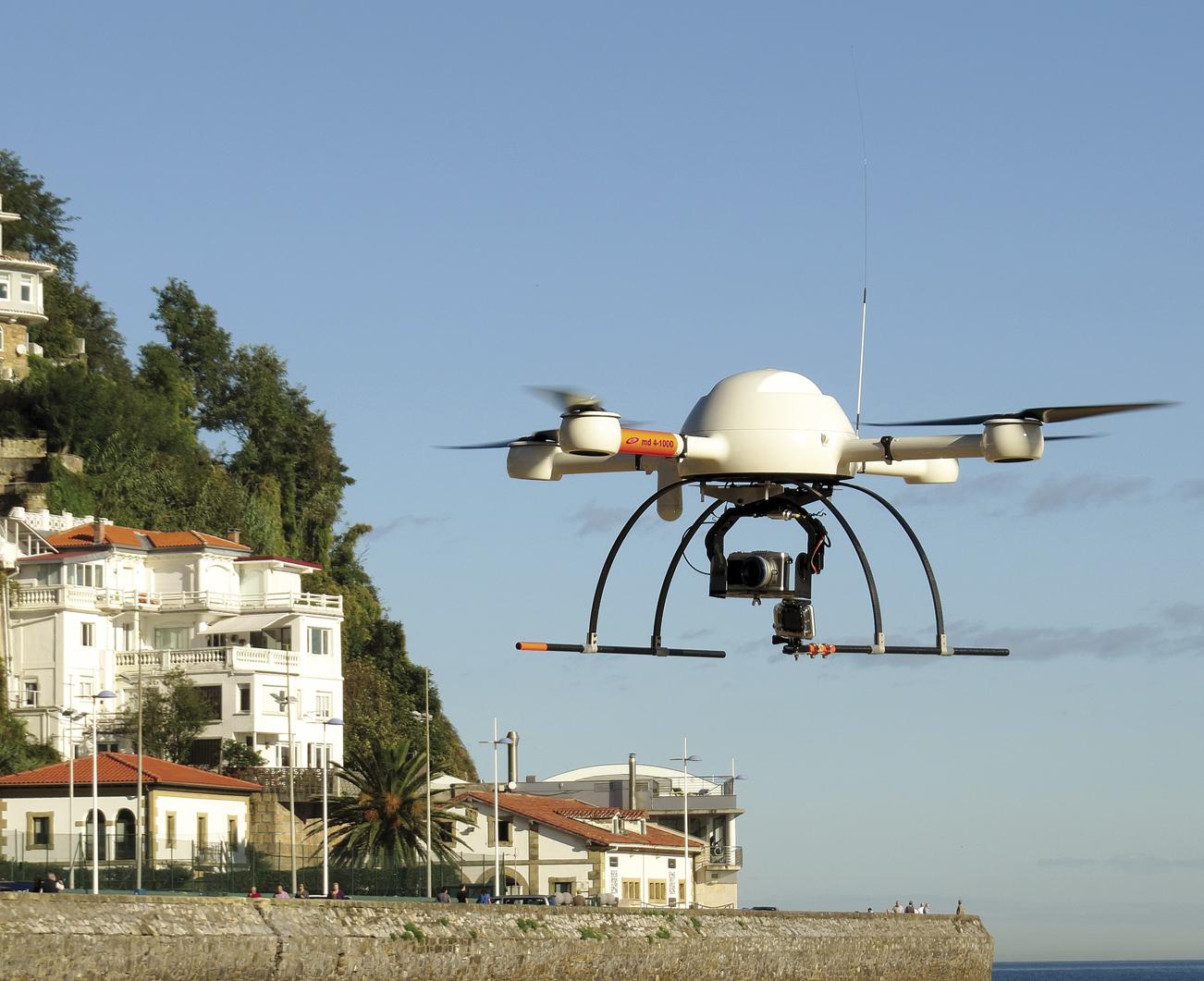 In the civil work cycle of the Professional Training of Bidasoa-Irun a drone was acquired three years ago and since then it is working with a flying device. "We use the drone to carry out photogrammetry work through photographs -- by Dani Tenarena, one of the teachers of the cycle. We seek to obtain three-dimensional information from Earth to produce maps that reflect the planimetry and altimetry of the land. Of the earth or of an object. In fact, in speaking of photogrammetry, I can reflect in the same way Mount Jaizkibel or, for example, the church of Hondarribia. In the end it is an object that I can imagine."

For purely aesthetic or entertainment purposes, the drone can be manually driven by a joystic and with the device in sight. However, for other technical works, they are conducted in a scheduled way. In the computer the programming of the flight is carried out, some points are specified to travel, waypoints and is indicated what to do in those points.

For the realization of photogrammetry works, for example, the drone makes photographs of the earth in an aligned way according to the objective that is wanted to look for and the path that has been given to it. Each of the photographs is superimposed to the next one, covering 60-70% of the previous one in length and 30-40% in width. 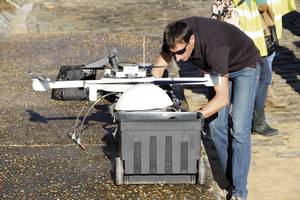 Through several equations it is possible to know at what time each of the photos has been taken and where the camera was at the time of its exit. With this information, the position of all surface objects is determined. "When we prepare the flight, we say to the drone, fly over the beach and take photos overlapping 70% and 40%. When we schedule it like this, it is the software itself that decides the number of photographs and positions it must perform to meet the requirements we have marked. The result is a point cloud."

According to Dani Tena, during the cycle, students must acquire the ability to learn to program a software that flies the drone. "Not only that, but they must also learn how to schedule the flight and then, once the device has landed, learn how to get photos, use photogrammetry software and make three-dimensional maps."

Substitute of the topography 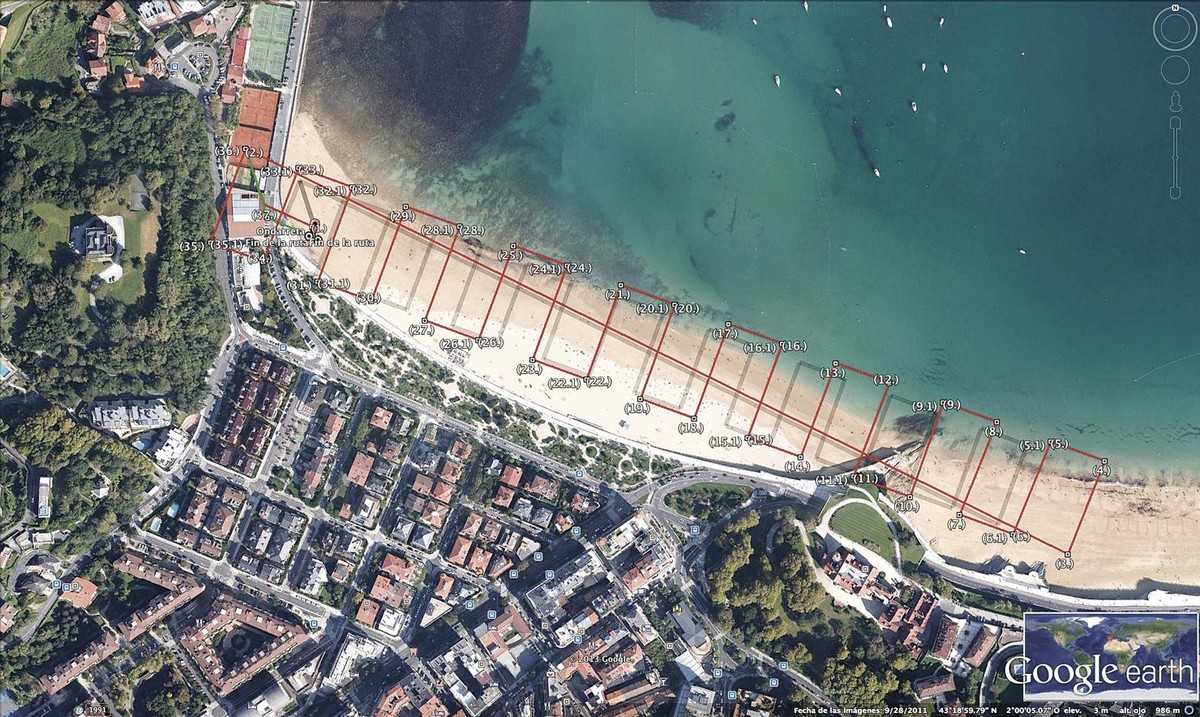 For the realization of photogrammetry works, the path and tasks of the drone and the software itself decides the number of photographs and positions to be carried out in these conditions. Ed. IE FPS Bidasoa-Irun

The images obtained with the drone are obtained orthophotos, that is, similar to the usual planes used in cartography, in order to make precise measurements. Ed. IE FPS Bidasoa-Irun

Photogrammetry with drones is considered to be the heir of classical topography in school, especially from a temporary and cost point of view. "When you are going to perform the sampling of the earth, the surveyor should take point-to-point data. To get between 3,000 and 5,000 points, a surveyor can spend a week working with classic methods. We fly one morning or one afternoon, bring the data to the computer and in 20 minutes generate 1,000,000 points. Perhaps the quality of our points is not so good, but the quantity represents this lack."

In the planes that are generated with the images obtained by the drones appears all that is in surface: ramps, shrubs, fences, stairs, banks... And these models also obtain orthophotos, that is, representations through photographs of the terrestrial surface, with all the elements that appear on the same scale, without errors of perspective. In the orthophotos, therefore, precise measurements can be made, as well as in the usual planes used in cartography. "It is the future. Topography and mapping have evolved over time, have passed several phases, and this is one more. It would not make sense to teach students to use the tools used 10 years ago," says Tena.

For the drone-photogrammetry pair, new applications are foreseen: building modeling, restoration, archaeological excavation as many times as you want, quarries, control of electrical installations, etc. The work of the drone will depend on the sensor put on it. "The flying device has its importance, but the device is not the most important, but the sensor that will be applied to it. If I put the normal camera, it will make normal photos, the drone will do the work according to what we will apply with the video camera, with a weapon… As Professional Training our goal is not to fly the devices. The important thing is that the student knows what type of sensors can place in the drone and what can do with this information." 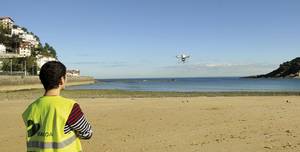 In addition to the scheduled mode, there is the possibility to drive the drone manually using a joystic. Ed. Beñardo Kortabarria/Elhuyar Zientzia

When the drone stepped on the sand of Ondarreta is noon and the exercise is over. The battery does not give it for much more, about an hour of travel. Enough time to collect the data, return to the center and perform the ortofoto of the beach with the information received.

The uses of drones can be, therefore, very varied, and the use itself frequently conditions the design of the same. They are classified according to the weight and type of south. "Those of less than five kilos, like ours, enter the category of microphones; from there, up to 200 kilos, are considered of average category and more than 200 kilos as big. Ratings are also made according to your restraint plane to get flying. Taking into account this, two types of drones are distinguished mainly: those of rotating wings and those of fixed wings. The presses can have two wings, four, six, eight or more; the fixed ones are like planes, with a propeller that allows the propulsion of the device and wings that ensure the containment plane".

The Bidasoa-Irun Professional Training Drone is electric and works with batteries. Larger drones also use another fuel, liquid fuels like planes, and have a great autonomy to fly, both in time and in kilometers. They can travel thousands of kilometers.

Both of one type and another, the drones move in a situation of allegality, since there is still no clear regulation. It is about starting the development of a regulation at European level, but so far they can be used freely in an uncontrolled airspace. That is to say, they cannot be used in the areas where commercial planes move -- in the vicinity of the airports -- they cannot exceed 300 meters of height, nor the flights on large crowds are forbidden, but the rest has no limits. "In the United States they are more advanced from the normative point of view, and by 2015 large drones and commercial airplanes are expected to share airspace." That is, there are new colonizers.

Drones in research
In June 2012, members of the Bidasoa-Irun Vocational Training had a project that could be an example of another use of the drone. In collaboration with the Polytechnic Institute of Palma de Mallorca and at the request of the Government of Mallorca.
It was a pilot project to measure the impact of the red fief ( Rhynchophorus ferrugineus ) on the palms. This 3-4 centimeter thick coleopter nidifies in palm trees, first by palm disease and then by drought. The aim of the project was to find those nests to identify healthy, sick palms, and they decided to do so from the air.
To carry out the project, a multispectral camera was installed in the drone. This camera incorporates an infrared sensor that perfectly shows the changes that occur in the vegetation and those that cannot be seen at first sight. With this information and using methods of remote sensing it is possible to carry out studies on the state of the vegetation. It is a technique suitable for the preparation of pests, situations of water stress, classifications of types of forests, etc., since in each case the response of the spectrum is different. This is what professor Dani Tena says. "Although in some newspaper it has been published like this, we did not go to end the plague of the coleopter, we only did a test pilot.
This is due to two fundamental problems: on the one hand, being a very new camera, we did not get enough juice and on the other hand, we did not have a unified and large sampling point. Many of the palms were isolated in the gardens of private owners. We did some flights, we got images, a little study, but until there. Now it is possible to resume the subject because they are asking for help, and it is possible that the multispectral is replaced by a thermographic camera, since with the change of temperature of the palms it is possible to find the cutting-edge".
Military origin of drones
Drones have the same origin as other current devices: the army.
The use of drones for military purposes began to expand at the end of the last century, especially by radio control and satellite. Fame began in the Gulf War, and in all subsequent wars, both in form and in form, they have had a leading role. 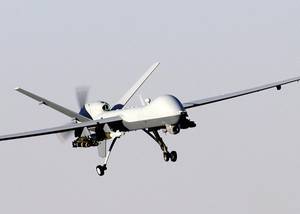 MQ-9 Reper drone military. Ed. Army USA/Public Domain
They have been used as a target -- to simulate aircraft attacks -- to collect information and, of course, for all types of attacks, especially in high-risk situations. This is the main advantage of drones, which can be used in hard-to-reach or very dangerous areas. And, of course, you don't need a driver.
Although they seem excellent devices to make war, they also have disadvantages: the interruption of satellite communications is not so difficult for computer experts, the time that goes from giving orders to receive prevents them from facing unforeseen events, they affect the changes of the atmosphere, they can be in the hands of anyone...
The big drones have also made the leap to civil society. They are used for the surveillance of the limits, for the surveillance of fishing vessels, for the monitoring of fish banks, in emergency services, in hydro-speakers that, controlled remotely, penetrate inside the fires, using thermographic cameras for the monitoring of fires even if there is smoke that prevents their vision...