The game of inequalities wins in the V Thesis Prize

This has been the fifth edition of the Thesis Prize that annually organizes the Basque Research website for the social integration of the works of researchers from Basque universities. A work on new markers of cancer cells has won the first prize. The second has gone to the world of touch and the special mention has been digitally signed.
The game of inequalities wins V. Thesis Award Thesis
01/07/2007 | Etxebeste Aduriz, Egoitz | Elhuyar Zientzia Komunikazioa

A total of 33 researchers have presented their disclosure thesis this year. The jury has taken into account a series of characteristics of these works to select the winners. Above all, it has given importance to the ability to explain the core of research in a comprehensible, attractive and with an adequate terminology, which is the foundation of dissemination or scientific communication.

The Seven Differences in Pancreatic Cancer

The thesis of the UPV researcher revolves around pancreatic cancer. Based on RNA, del Amo has developed markers for the diagnosis of this cancer. In fact, the synthesis of RNA in tumor cells - and therefore proteins - is not the same as in normal cells. That is, there are fragments of RNA that should not normally be present in tumor cells. Y del Amo tells how he has identified differences by comparing the RNA of tumor cells and normal cells, remembering the set of seven differences.

On the one hand, this can serve to know which mechanisms - or which RNAs and proteins - exist behind the rapid proliferation of tumor cells. On the other hand, these RNAs and the proteins that encode them can be used as markers for pancreatic cancer. In fact, in his thesis Del Amo has developed antibodies for several proteins that encode these RNA, and has shown that, together with a dye, the cancer cells of the pancreas can be used to differentiate from normal cells.

The world of touch

Haptic devices allow you to touch what you see, as on the computer screen. This technology can have interesting applications in the industrial field, in which Dr. Iglesias has investigated.

In automotive and aeronautics, for example, before making physical prototypes, virtual or digital models are made. And designers and engineers, with the help of computers, test the processes and sequences of assembly. Well, Iglesias has researched touch mount systems and developed a simulator: Touch simulator for mounting CHAS (Collaborative Haptic Assembly Simulator). Thanks to this simulator, two designers who are in different places can work simultaneously and, for example, a designer can mount the piece that is subjecting to the other; both will feel the weight of the pieces, the shocks that occur during assembly, etc.

Finally, the jury has decided to grant the special mention of this year to the best work presented in Basque. In fact, in this year's competition there have not been many works in Basque and have made the decision to promote this aspect. 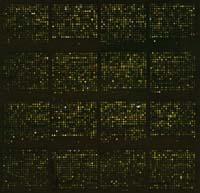 The comparison between tumor cells and normal cells is made by 'images' of this type. Where are the 7 inequalities?
Medical Research Council

The best of these works has been "And now sign here please...". Juan José Igarza Ugaldea, of the School of Engineering of Bilbao (UPV-EHU), can spend a weekend in a rural house with Nekatu.

Many times we use signatures as identification. And Dr. Igarza has investigated how to perform the authentication of these signatures. In the case of paper signatures, the spatial distribution of pixels with ink can be scanned and analyzed. However, it is enough to imitate the aspect of the signature to deceive it. However, if the signature is done in a digitization table, in addition to the spatial appearance, the trajectory, duration, pressure and inclination of the pencil is collected. In this case, counterfeiters are very difficult to work, since in addition to appearance they should imitate all the dynamics of the firm.

V. V. The 33 works included in the Thesis Prize are also signed. Of these, 24 are signed in Spanish, 5 in Basque and 4 in English, and their subjects are very varied. All of them are available on the Basque Research website.