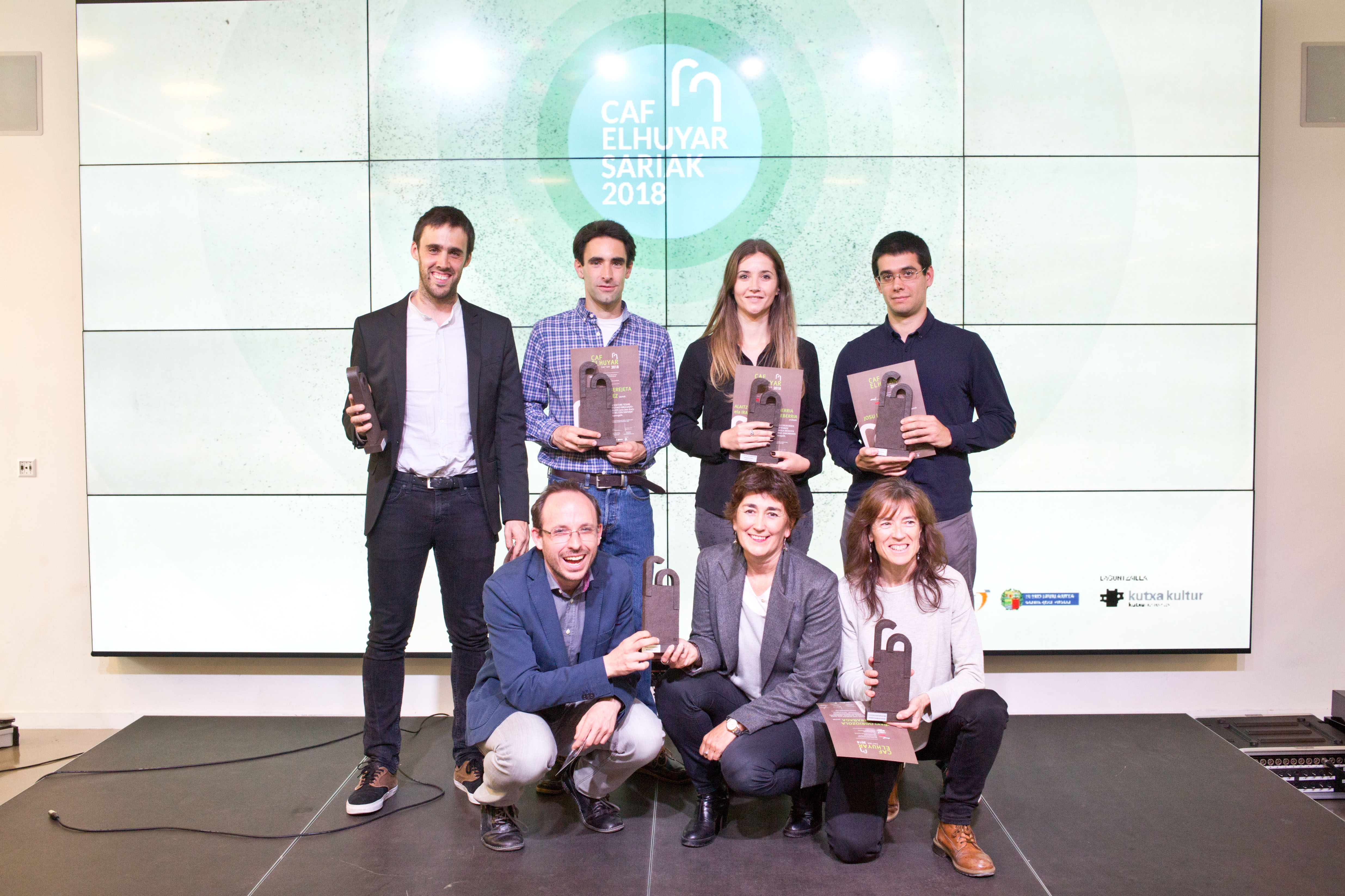 “Take the leap and create expansive waves.” This year's motto has been very significant. More than 80 researchers, journalists, artists and fans of science have jumped and the result has been evident at today's event in Tabakalera.

“Symphony of black holes”, by Miguel Querejeta Pérez.Award for the dissemination article based on the author’s doctoral thesis.

Among all these creators, the sculptor Imanol Andonegi Mendizabal, author of the sculpture of the CAF-Elhuyar awards, has had a special light this year. In a video he explains its meaning: “My way of working is not texts, they are forms. Well, this body has an element that represents a tunnel, which is identified with CAF trains, and another tunnel, but expanded, that wants to refer to Elhuyar. Spreading Basque and science.”

Imanol Andonegi in his workshop performing the sculpture of CAF-Elhuyar.

Sculpture has paved the way for the winners. One by one prizes:

A circular solution against waste that is swallowing the world

The award for the general informative article has been for the Lesakarras sisters Alaitz and Iraia Etxabide Etxeberria, with the article entitled “A circular solution against ubiquitous waste that is swallowing the world”. Alaitz researches solutions to the problem of plastics and sister Iraia illustrates the article she has written. It is the result of collaboration between the two. 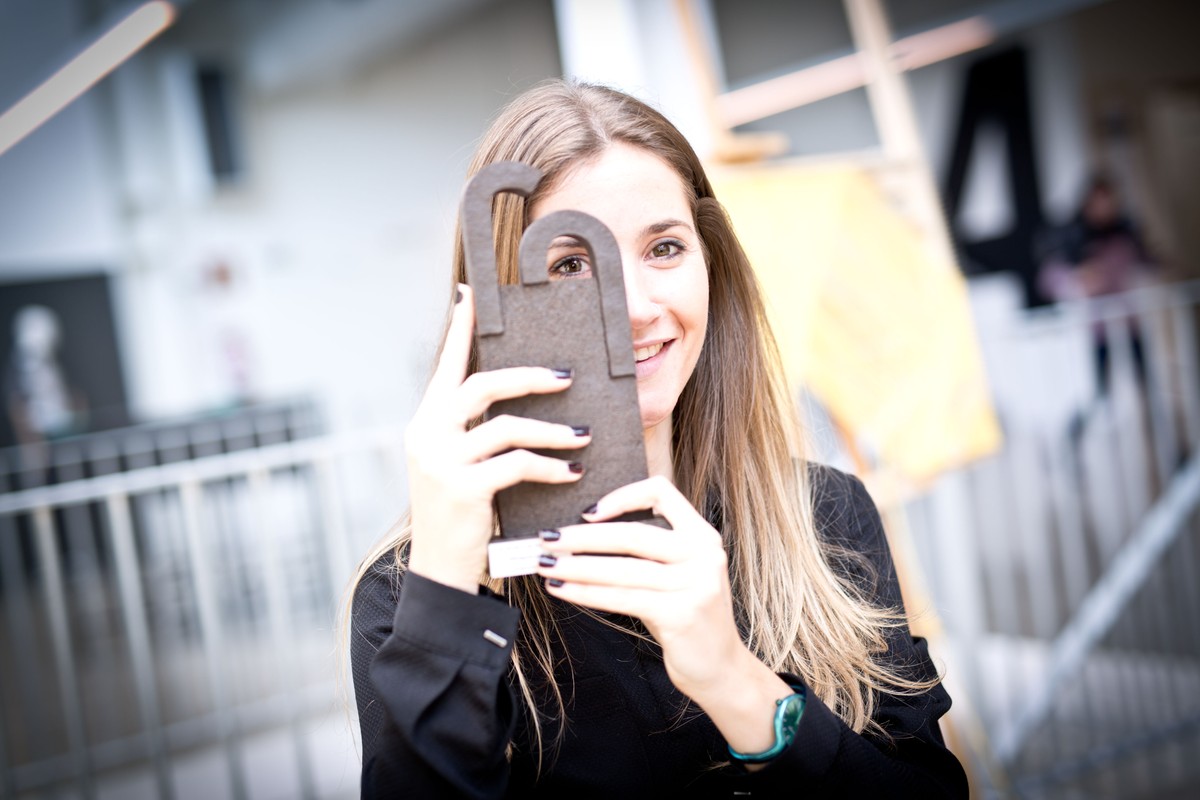 Iraia Etxabide, collecting the award on behalf of her sisters and both. Ed. Free announcement

The Special Neiker Prize, which rewards the works of the primary sector, has been for the basket Iñaki Odriozola Larrañaga, for his work “Montes de Euskal Herria: carving landscapes of great herbivores”. He is a researcher at the Institute of Microbiology of the Czech Academy of Sciences, but he did his thesis at the UPV/EHU and has written the article based on it.

His work turns a myth upside down. While it is true that open landscapes and pastures emerged with human intervention, with the aim of exploiting wood and feeding animals, Odriozola clarifies that European landscapes were largely shaped by large wild herbivores. “We have done this work to show the importance of grazing and its ecological function,” said Arantza Aldezabal, UPV researcher and thesis director at Odriozola, who has received the award. 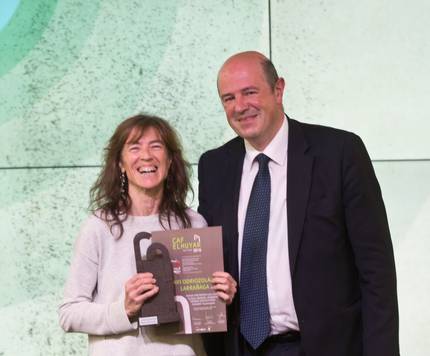 Arantza Aldezabal, collecting the prize on behalf of Iñaki Odriozola.

In addition to what they have enjoyed with the work, he recalled difficult moments: “In Aralar we have done most of our work and perhaps you do not imagine what conditions occur in summer in the Arala, have been the cold and the worst moments that have happened on some occasion, climatically. However, we’ve been enjoying it.” He also highlighted the relationship with pastors: “Pastors have taught us their embroidery, their life. We have had breakfast with them, talked to them and a real relationship has arisen. Now they look at us with other eyes, they don't see us in college as researchers with crazy ideas in their office. They have seen that we love the mountain and know how to work on the mountain.”

The award for the dissemination article based on the author’s doctoral thesis was given to Miguel Querejeta Pérez from San Sebastian with the work “Symphony of black holes”. Querejeta is an astrophysicist and works at the Max Planck Astrophysics Institute in Germany. He has done his thesis on the interaction between giant black holes and galaxies. Querejeta's article is a true cosmic spectacle. In addition, it is not the first time you win a CAF-Elhuyar prize: He also received it in 2013 in the category of general article.

On this occasion he has great mastery how the giant black hole in the center of the galaxy influences. “A certain revolution in astronomy is taking place today,” he explains when collecting the prize. The ALMA interferometer, in the Atakama desert of Chile, allows to detect the gas that was previously invisible in the universe; the LIGO interferometer also allows to detect the waves that cause the gravitational zones. Therefore, new windows have been opened to look at the universe.” 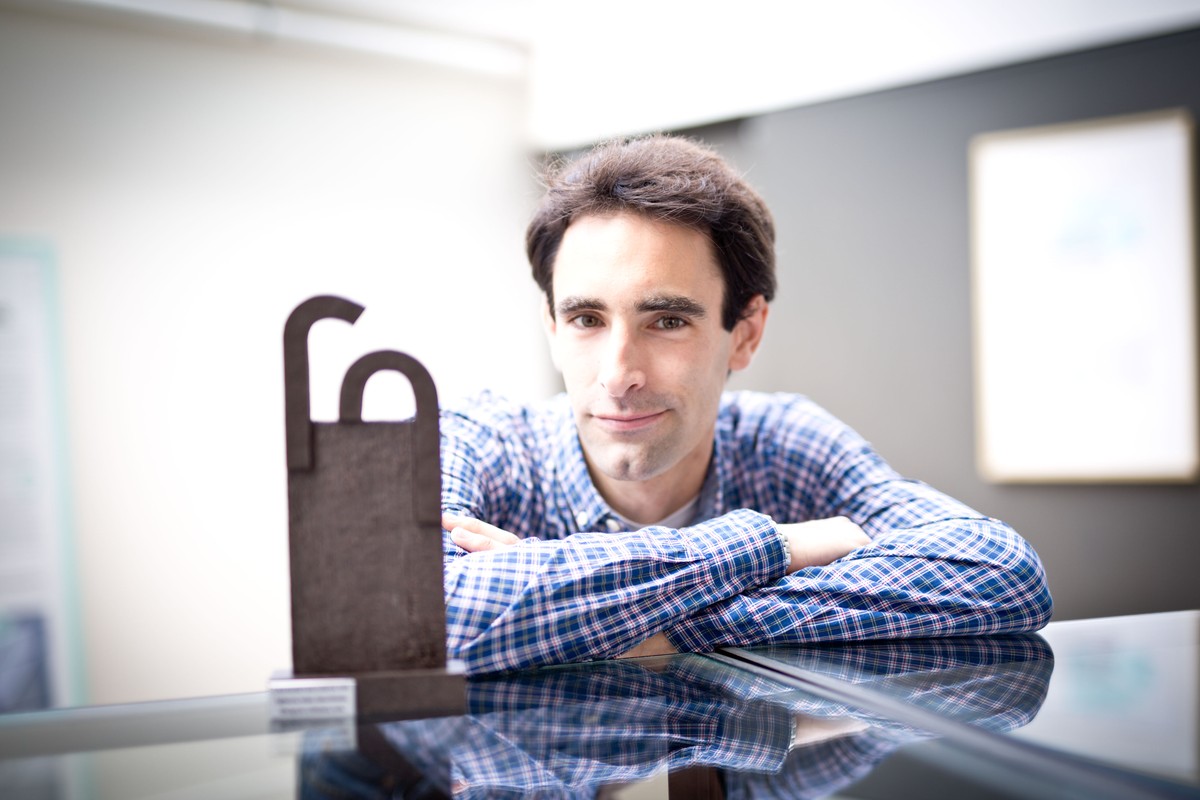 On this occasion, the category of scientific journalism work has not been won by a journalist, but by a chemist, the tolosarra Josu López Gazpio. López Gazpio is a passionate disseminator who can read the written article: “The health impact of Christmas holidays.” He published in the Science Hall, just before the Christmas holidays began.

“They saw,” he says, “that Christmas holidays increased mortality. December 25 and January 1 are the most likely days of death.” As this beginning demonstrates, humor is the most common component of Lopez-Gazpio's works. 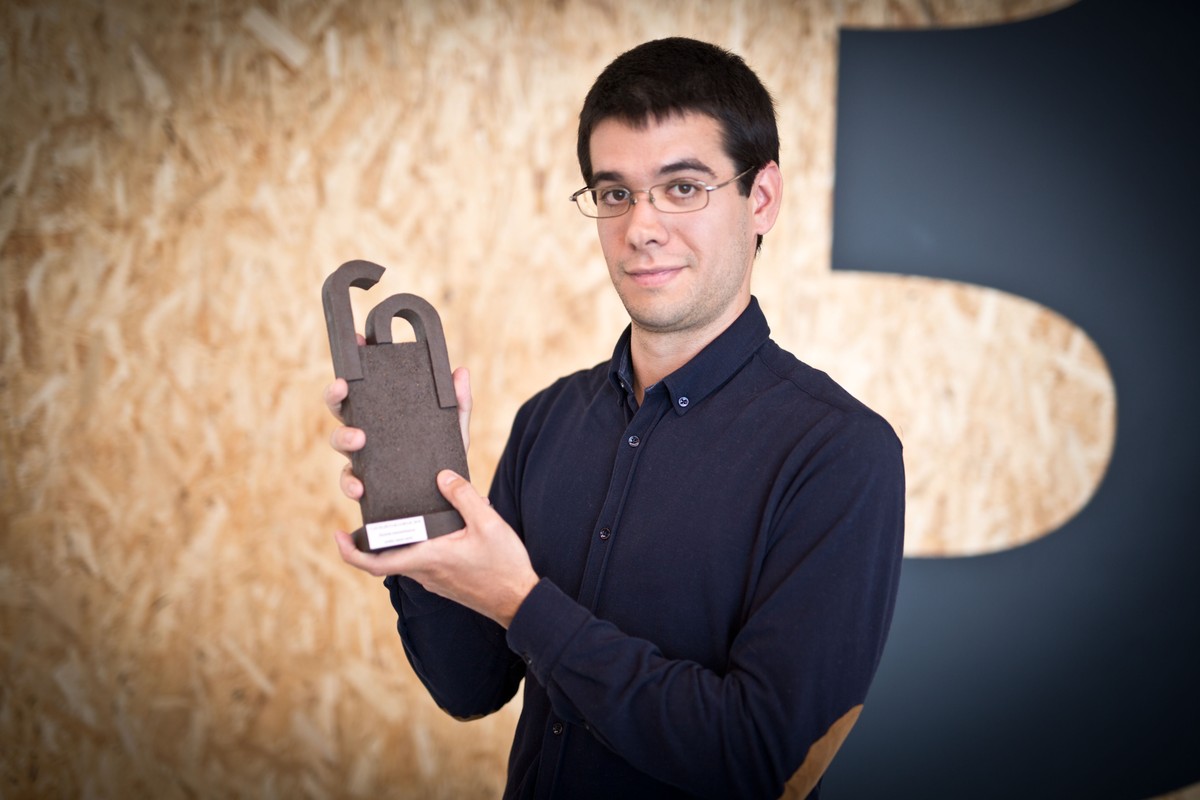 The CAF-Elhuyar Awards also intend to promote projects that bridge science and society. This year, a project that combines reflection on architecture with technology has won a scholarship of € 5,000: “Bastartak!”. The authors are the Donostian Ander Gortazar Balerdi and the Polish Jacek Markusiewicz, both architects.

“In Euskal Herria we pamper too certain architectures -idealized farmhouses, or beautifying old helmets– and give up a very interesting architecture. We say it’s ugly and we’ve come to question it.” This is what Gortázar said when collecting the award. XIX. Remember a quote from the 20th century: "Instead of conditioning the view of the landscape, opinion is what conditions the landscape, so we become creators of beauty or stimuli of beauty. We therefore demand sordid buildings, cursed buildings and bastard buildings.”

“With the scholarship we want to create an Android app to change this perception,” said Gortazar. "To turn blindness into tenderness. Allows interactive visualization of the characteristics of interest of buildings. For this we have chosen five buildings, five in the surroundings of the Bay of Pasaia. With industrialization this landscape changed very quickly and we want to value what is there.”

Finally, the Board of Trustees of the Elhuyar Foundation awards the Elhuyar Award of Merit. Through it, it recognizes the work done in the normalization and socialization of Basque. This year Ekaia has been for the journal of Science and Technology of the UPV. In a course of almost 30 years, Ekaia magazine has shown that the quality of scientific journals in Basque is the same level as many international journals.

Director Vallejo says that 30 people are in the team and recalls the hard start of the magazine. The future has also been present: “The health of outreach in Basque is good, but that does not mean that things cannot be improved.” 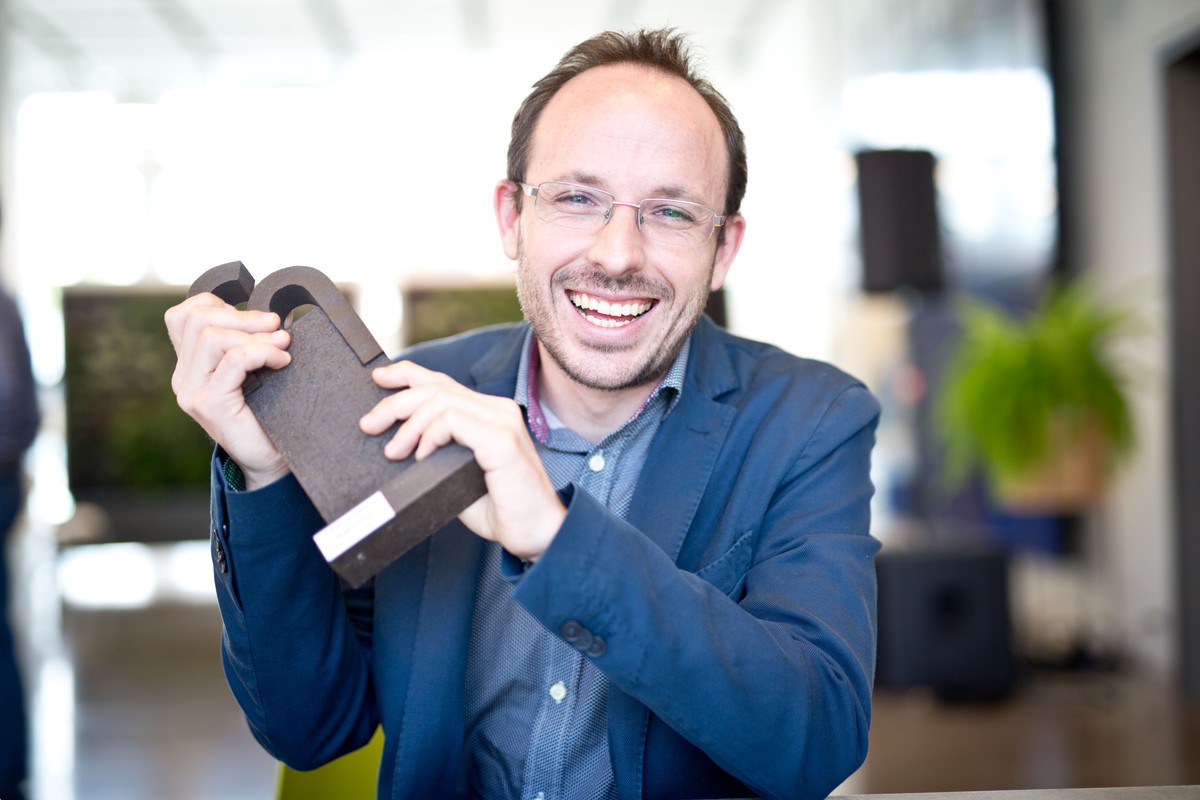 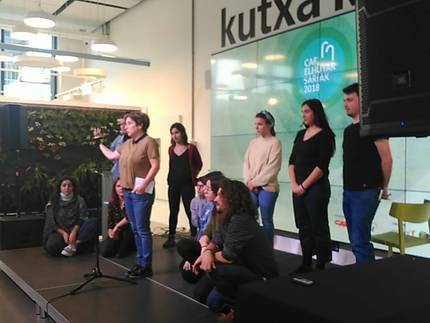 After the awards ceremony, the members of the Arminxe Animation Group have shown the result of the project that last year received the creation scholarship in Science Society: Animated short film “Miraila”. It is undoubtedly the result of a fruitful year that has led all those who have approached the contest to the past, the world of paintings and representations of the caves. Armintxera.

Bego Vicar told about his challenges and difficulties. “Through our body we have placed ourselves in the bodies of those Homo sapiens who 15,000 years ago were recorded in the cave of Armintxe. As if it were a mirror, we made the same gestures that they did at that time.” The words of Miren Amuriza have put the work Miraila. His words dazzle and surprise the public. Start by:

“We no longer consider that 14,500 years ago we entered the cave of Armintxe. We did not remember, on that occasion, those we had set out to look at our bare feet."