Polymeric batteries electrolytes in the hunt of anions

What if a battery could only store part of the energy used to charge? Or if only a small part of the saving energy could pass to the mobile device? Side reactions inside the battery have a lot to do with it, and finding a suitable polymer electrolyte can help to improve battery efficiency. 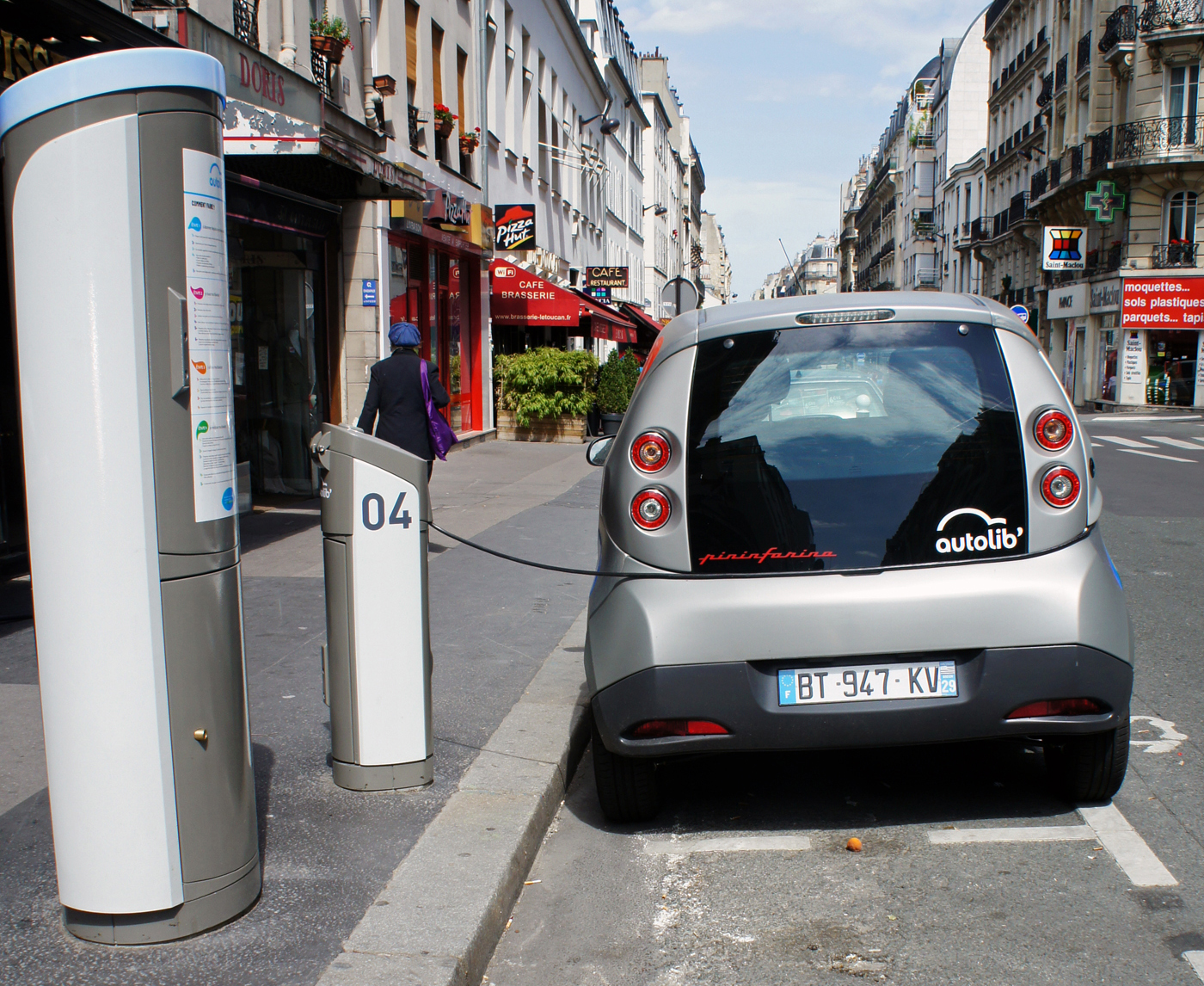 The use of polymeric electrolytes allows the manufacture of batteries suitable for electric cars. Ed. Mariordo/Wikipedia

When Sony first launched lithium-ion batteries (VOL) in 1991, the doors to the revolution of portable devices were opened. Thanks to these batteries, both mobile phones, tablets and laptops that we currently use have been extended. However, as energy needs increase, it is necessary to take one more step.

If lithium metal (Li0) is used in the anode of these batteries instead of graphite, its capacity would be multiplied by ten. Lithium metal, however, is very reactive and has problems combining them with flammable and volatile liquid electrolytes. In short, it is easier for reactions to occur between a liquid and a solid than between two solids. Therefore, when liquid electrolytes are used together with the Li0 electrode, the probability of lateral reaction is greater.

One solution is the use of solid polymeric electrolytes. In this regard, María Martínez and her co-authors of the CIC Energigune recently published in the journal Advanced Functional Materials, that the addition of a little LiFSI lithium salt around 2%) significantly improves the characteristics of the polymer electrolyte PSTFSI/PEO. 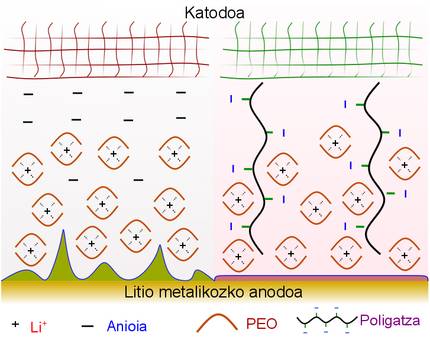 Figure : Evolution of an electrolyte salt with anions and mobile cations (DLIC) and anion attached to a polymer (SLIC). In the second case, the anions are trapped and only Li+ moves to the electrode, avoiding the polarization of the electrolyte. Ed. María Martínez and authors

To solve this problem, electrolytes are currently used with solid polymers that make it difficult to create dendrites. In any case, as mentioned in the publication of the researchers of CIC Energigune, there must be something that prevents the mobility of the electrolyte anions. Thus, in polymeric electrolytes that are only conductors of lithium ions (SLIC), anion binds covalently to a polymer trunk that makes mobility difficult. Consequently, in these cases the polarization of the electrolyte is avoided and only the lithium cation (Li+) can move towards the electrode.

Numerous studies have been conducted on the solid polymer electrolyte LiPSTFSI/PEO. In general, polyethylene is a lithium polygon of the polystyrene trunk (PS) extended in oxide (PEO). This electrolyte, however, presents a low ion conductivity. This is because the PEO and PS associated with anion are not intrinsically interactive, making it difficult to dissolve LiPSTFSI salt.

In addition, between the Li0 electrode and the electrolyte, a very lithium-resistant surface is created. Taking into account that the function of the electrolyte of lithium batteries is to transport the Li+ cells from the electrode to the electrode, both characteristics reduce the efficiency of the batteries.

The research team has been able to verify that when this polymer electrolyte is added some LiFSI salt (only 2%), the conductivity of the Li+ ions inside the electrolyte increases considerably. In fact, NMR in solid state (SSNMR) and Raman spectroscopy have been able to verify that the addition of this salt facilitates the interaction between polyethylene oxide and polystyrene of the trunk of the electrolyte and the dissolution of LiPSTFSI. In this situation, ionic conductivity is mainly due to lithium cations, since the anion is trapped as it is attached to polystyrene and interacts with polyethylene.

Figure : If LiFSI salt is not added, the polymer associated with anion (PS) does not interact with the other polymer (PEO). When adding a little salt, however, place the Li+ between the two polymers and facilitate an interaction. Ed. María Martínez and authors

It has also been proven that the addition of this salt reduces lithium resistance in the electrode/electrolyte interface. Thanks to the theoretical calculations it has been possible to verify that the LiFSI salt is reduced when reaching the surface of the metal lithium electrode and LiF is generated. The presence of LiF on the surface of the lithium metal significantly facilitates the movement of the lithium cation.

And using in battery… 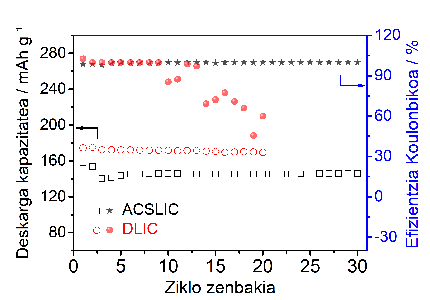 Figure : Evolution of the capacity of the polymer electrolyte investigated and an electrolyte type DLIC, cycle by cycle. Although the DLICs have a certain capacity, the SLICs doped with lithium salts achieve significantly greater efficiency. Ed. María Martínez and authors

Experimentally they have been able to demonstrate that with this polymer electrolyte it would take twice as long to create dendrites in the lithium metal anode and to produce a short circuit in the battery.

Basically, by using this solid polymer electrolyte in a battery with LiFePO4 cathode, a higher battery efficiency is obtained than with other polymeric electrolytes. Moreover, this electrolyte polymer can also be used for other cathodes of higher tension.

In addition, what was done by the research team of CIC EnergiGUNE (that is, equipping the polymer electrolyte with a small amount of salt) is simpler and cheaper than synthesizing other polymeric electrolytes.