On a sunny day in October we went for the first time to the place called Arrano-etxea, located in the Igeldo district of Donostia. That day the drink was just opened and the shots of the hunters were heard during our stay in this center of recovery of birds. 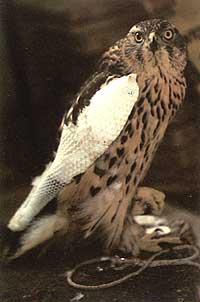 There were seventeen drenes who brought this magician out. It has the two wings sold.

The situation was, to some extent, ironic, that in the House of Eagle, directed by the Donostian doctor Josean Albisu, the most numerous clients are the birds shot by the hunters. In the Basque Country there are three centers or residences for the recovery of birds: This of Igeldo, center of the Diputación de Álava and the Diputación de Navarra. In these centers, injured or sick birds are treated for various causes. In addition, in most cases they are birds of prey. We have addressed the pediatrician Josean Albisu, who runs the Igeldo Eagle House, to know how a center of these characteristics works.

Elhuyar- How did you start working on this work?

I started with fondness. I have always liked the themes of animals a lot and my house has been like a small zoo. Before we lived on a flat in the Antiguo and there we had many animals at home. When we moved to Igeldo to this house, as we have the inheritance, new possibilities arose to have animals at home. With this problem of the Bird Hospital we started three years ago. By hobby.

E- How many animals do you have at this time?

The truth is that I have not told them one by one, but now there are about 50 at home. Most are birds of prey. In October the number of animals brought increases considerably. You know, the drink opens and... However, hunters are of two types and those in charge of shooting. On the other day, a calf hunter came to us in Landarbaso with an azor who had in his hands seventeen drains nailed. He was full of rage, because he told us he had heard two shots and that the bator fell wounded at his feet. He told us that if he had caught the shooting, he would have killed. This knew that the azor was a protected and scarce species.

E- When he had the seventeen in the body, he will have already died, right?

We did not remove the drenes, except the one in his head, which is still alive and apparently in good health.

V- How many of the animals brought are finally formed?

Well, so that you can once again let loose on the mountain, in our case by cow, there are between 10 and 15% of the birds brought. At first glance it does not seem to be a very high figure, but it is true. As mentioned in the bibliography, recovering 4% is a very good figure. According to the results we have here, between 15% and 25% die in the first week, between 30% and 40% are disabled people and cannot be released and 10-15% are liberable.

But here we have another problem, the human brand or impregnation. During the time the birds pass here, they become accustomed to humans, feed on their hands, and partly lose their panic in nature. That is not good to then walk on the mountain. When we let them loose on the mountain, we do not release them nearby. Otherwise we would be here asking for food because we have fed him every day. The problem of the human brand is aggravated when it remains long with man.

V- Can the human brand be reduced?

This red milano is melting. It has the right wing sold. When we made the second visit he was able to stand up.

It exists. Great means are needed. Feed automatically, do not see the man if possible, and when animals are released with sticks or scare them... We here do not have that kind of means.

V- Before you have told us that the animals brought reproduce much in October due to hunting. What is the main cause for bringing animals here?

Traumatisms are the majority of the injuries suffered by birds brought, around 70%. In the field of traumatisms, shots, crashes with cables and cars and those produced by strains are taken into account. Many others are offspring fallen from the nest: 20%. This type of cases occur in spring and summer. In a smaller proportion are captive animals (5%), poison (3%) and fatigue (2%).

This summer has been very curious. We do not know why, but we have had more starving birds than ever. They were marine birds: ditches and gulls.

R- Many of the birds you have in the garden have their wings sold and some also have clove shape. What is that for?

It is very common for birds to come with broken wings. So we have to bind the wings so that they do not move and the bones release. Sometimes we must put the nail to hold the bones. It is not an easy task. Keep in mind that the bones of the southern birds are many and very fragile.

I have no operating room to perform the operations and here I put myself on the table, I give anesthesia and do the necessary operations.

A - The cost of this type of work will be high. Do you have any help?

There are also migratory birds. This stork was ringed in Czechoslovakia.

I think that from now on, after signing the agreement, we will go better. So far I had to ask for favorite when I needed material, for example asking a well-known dentist who had an old lathe. On the other hand, it had the house refrigerator full of food for animals. Less bad than the Diputación has recently delivered us a freezer.

Thanks to the fans of a man there is the only center of recovery of birds of Gipuzkoa. To solve the problem of injured animals does not seem to be the best way. We consider that the Council, the Government or other official body should open a specialized center, equipped with appropriate personnel and tools to deal with these cases. Although the efforts of some fans like Josean Albisu, perhaps crazy, are totally applauded, it is not the answer that our society should give.

Night birds are the most vulnerable. Urubia.

When we were there, the image falcon was undoubtedly the brightest star of the Eagle House. Because it was not a falcon that can be found among us. It was a beautiful, elegant and charming animal. As soon as we saw it, we have dreamed of being of this type, although it is probably not possible. 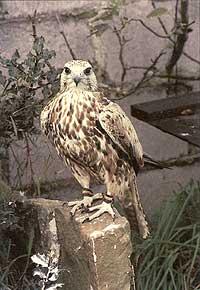 It is a black kestrel of the Middle East.

At the end of April he stayed in a fishery 100 miles from the coast of Brittany, demolished. In the claws had straps, small straps used in the hunt of azores, and it is believed that he fled some yacht or transatlantic. The black piglets are highly appreciated by the Arabs for use in the hunt of azores.

Last December, he was sent by plane from the Eagle House to Hungary, a centre specializing in the recovery of the Sakre falcon. After a period of air conditioning the falcon will be released. In Hungary, a campaign to recover the population of Sakre belatz has been taking place in recent decades. In 1937 only 14 couples remained. There are currently more than 40.

This black fence has spent 7 months in Arrano-etxea.