“According to the definition of the species, we cannot say that Neanderthals and sapiens are different species”

Some of the articles published in the journal Elhuyar have been republished on the platform Booktegi under the title Front to the mirror Sapiens (you can download for free). The thread that sews the articles: explain where the human species comes from, what it is and where it goes. In those related to the first question, the archaeologist Joseba Ríos Garaizar is frequent. In particular, Ríos is a researcher at the Human Evolution Research Center (CENIEH) and an expert in Neanderthals. Thus, at the presentation of the collection he invited Ana Galarraga Aiestaran to Ríos. After an intense colloquium, Ríos showed that archaeology is a good tool to annul prejudices about Prehistory and learn more about our species. Here we collect some of the ideas that Rios has gained in that talk. 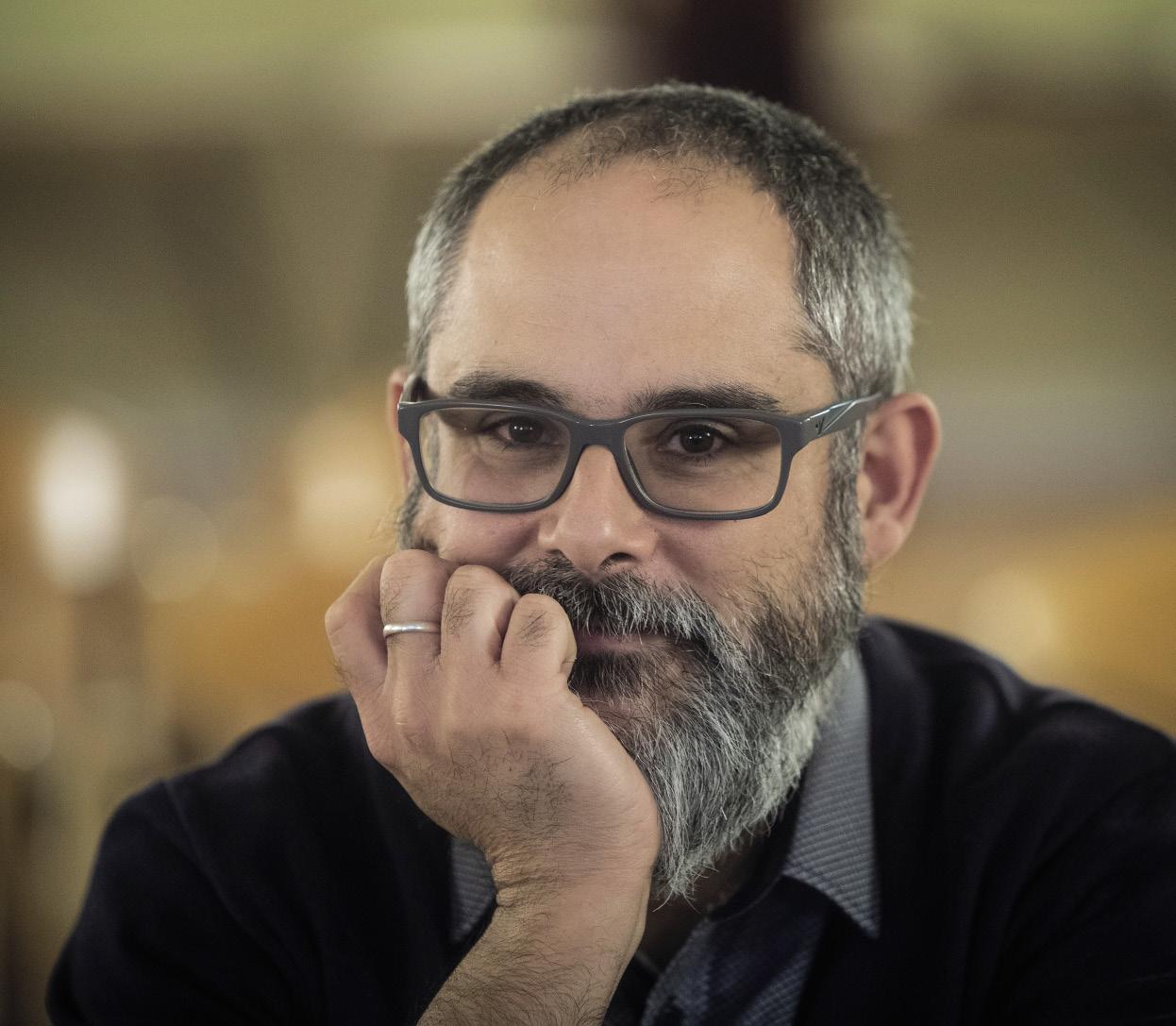 Ed. Jon Urbe /©Argazki press
On the fascination of Neanderthals

By researching Neanderthals we investigate humans, but other human beings. And that allows us to ask ourselves what we are, anatomically modern beings, and how do we distinguish ourselves from others: we are the fastest, the best fit? Maybe not as much as we thought. Based on the existing traces, archaeology allows us to reflect on the basic questions of philosophy (where we come from, who we are, where we go) and to reach some conclusions.

A quote from Ríos: If we met a Neanderthal on the Bilbao metro, we would not understand it as different.

From the traditional point of view, the species that have survived are better than others. And as the Neanderthals have disappeared, they concluded that it was a backward species from ours. But the same has been thought about peoples or races, in the line of social Darwinism. However, this perspective is Europarcentrist and racist. The same thing happened with the Neanderthals, and there are still people who use the Neanderthal word as an insult.

Eliminating the stereotype of Neanderthals

This vision began to change in the 1980s. Until then, when remarkable collections were found in the deposits, such as the instruments worked or those with portable art, they always thought they should be made by modern humans. In France, for example, there were important deposits of Châtelperronian culture. Well, in the early 1980s, along with these remains, Neanderthal bones began to be found. As a result, they realized that modern human beings were perhaps not the only ones who could do such things, and that, perhaps, Neanderthals were able to do so.

Since then there has been a strong struggle among archaeologists, because some have not wanted to recognize it. For example, there were those who said yes, that the Neanderthals did that, but by imitation. And today we continue to argue, but in general it is assumed that they had abstract thinking, that they spoke, that they transmitted culture…

History is always written by the winners

We have seen that in some moments there were large populations, in others not so much, and in the end they remained in isolated groups. This genetically weakened and broke social relations between groups. As a result, Neanderthal populations gradually lost. It is a very long, very slow process and probably the last blow was the appearance of our species.

But even if our species had not appeared, they would have been lost. And since 60,000 years ago, the trend went down uninterruptedly. It should be noted, however, that in times prior to its disappearance the most complex art and the most important symbolic expression developed. But, well, in a study we published last year we concluded that when our species arrived in the Cantabrian area, it found the territory empty. By then the Neanderthals had disappeared in this area. 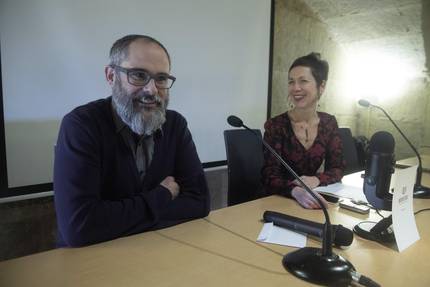 Joseba Ríos Garaizar, together with Ana Galarraga Aiestaran, in the presentation of the book before the mirror Sapiens. ED. : Jon Urbe/©Argazki press.
On the contribution of genetics, the appearance of denisoveses and the writing of hibFeses

The sequencing of ancient DNA has disrupted many of the previous beliefs. It is clear that our species and the Neanderthals, as well as the Denisoveses, hybridized and had successors. Therefore, according to the definition of the species, we cannot speak of different species.

The point is that before developing these sequencing methods, to classify the species and see the relationships between them, bones, fossil bones were used. And if we look at the bones, the Neanderthals are very different from us. But as we now know that there are also hybrids, in the coming years we will surely see that some of the considered Neanderthals are hybrids and vice versa.

I think in the coming years we will see everything in question, very confused, and then there will be calm.

Another quote from Ríos: The genealogical scheme of our species is more like a scrub than a tree

For example, what do we know about denisov? We know that there is a site in Siberia, called Denisova, in which several traces have appeared and have performed an analysis of ancient DNA. And they conclude that this is another species. And there, in that same field, they have...

It is a mess and it is very difficult to follow everything that comes out. Not just modern Neanderthals and humans. For example, if we move into the Neolithic, the analysis of ancient DNA is revolutionizing everything we knew; it's not my specialty and I'm really lost.

Questioning and review of conclusions

It is true that following everything that comes out is almost impossible, but if we look with perspective, the general image may not have changed so much. However, we are knowing very interesting things thanks to the new methods. Returning to the Neanderthals, we have known that they had a bottleneck in their population, and we know when that happened, because thanks to genetics we have known those things. Other studies have shown that at that time there was a climate crisis, with the end of the interglacial period and the cooling of the climate becomes very fast.

When we say fast, in this case, we mean between 1,000 and 2,000 years. Archaeologists, climatologists, etc. we measure time on another scale. It is important to keep it in mind, otherwise the facts are not well understood. 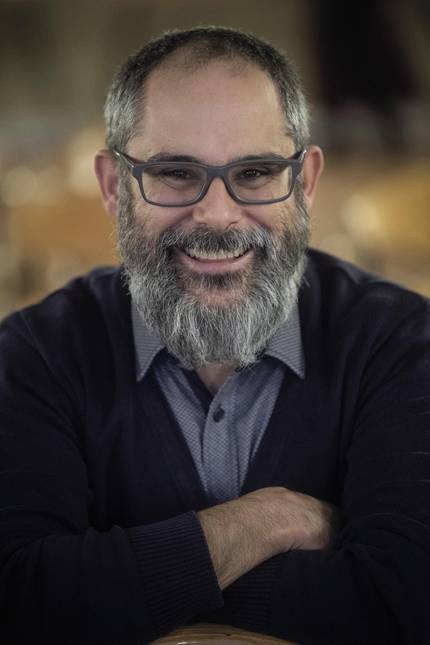 For example, if we consider that in the Palaeolithic the modern man entered Europe as the invasion of the Huns, people will think that all came at once, in a very short time. But this process lasted approximately 8,000 years. Imagine how many generations go into 8,000 years, how many people go, come, mix; how many groups of modern men will be isolated in Europe and lost...

On gender differentiation in the division of labour

The Palaeolithic is a very long time, with more than one human species in different situations and a huge diversity. So what we know about a group does not help us to explain what we know about others. Today among us there is everything, there are no general behaviors.

In fact, almost all we know is whether the delivery was female. Other related issues may also be considered true. For example, a pregnant woman would not be very appropriate for hunting, and the care of children, at least during the first few years, would depend on them. This also happens among primates, and we have no further evidence to think otherwise.

From there we know nothing more. For example, to hunt, what do you need? A good weapon, skill, knowing how animals move… surely there will be women able to do it.

Surely there will be different situations and in some groups and times gender distribution would be very marked and in others not. Biologically, sexual dimorphism is less accused in our species than in other primates. That also influences.

On Eurocentrism and Paleolithic Art

All disciplines must be understood in their context. The first archaeologists were European and studied the European deposits. Therefore, everything we knew was based on what we discovered in Europe.

Then, however, some groups began to investigate in Africa, and what was discovered there revolutionized: very ancient human fossils, ancestral instruments... “The cradle of humanity.” Therefore, the initial vision has changed radically.

Asia was also very forgotten and it has been there that some paintings of the Palaeolithic have been found. They are located in Indonesia and are very similar to the best known in Europe: style, appearance, technique, location... and of the same time.

There are two options to explain that those in Indonesia and those in Europe are so equal. First of all, it can happen that at the same time there is the same type of art in Europe and Indonesia, although it is very difficult. The second, which first arose somewhere between Europe and Indonesia, and from there spread in one way or another. But it is also a hypothesis; we have not yet found any traces in the Middle East or Africa. However, it is likely that in the coming years things will begin to appear in those places. 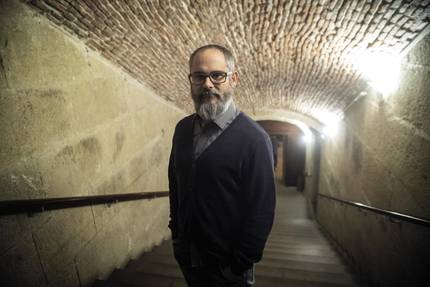 There have also been shortcomings here and for many years it has been considered that in Gipuzkoa and Bizkaia there was no Paleolithic art, except for some exceptions such as Santimamiñe, Ekain, etc. And we still find nothing in Alava!

In Gipuzkoa and Bizkaia we started in 2010 with the cave of Askondo (Mañaria) and from there we found about 20 caves with rock art, some very rich and unique. For example, in Aitzbitarte (Errenteria) bison carved in clay have been found.

It is curious because some of the caves are well known and visited. The paintings of the bison found in Lumentxa (Lekeitio) had above graffiti. Instead, nothing has appeared in Alava, but I am sure it will appear.

The first is always the favorite, mine is Askondo. He also broke many prejudices. It is located in a quarry and was not destroyed by pure chiripa. Despite its bad condition, it has two horses painted red of great beauty and are older than most of those found in the surroundings. Most are Magdalenians (about 14,000 years old) and those in Askondo are 10,000 years old.

Askondo, in addition to filling a void, made us think that they would be more, and so it has been.

We are very close to Atapuerca and nothing has been found here that can be considered as the Lower Palaeolithic. I would like to find it, but it will be very difficult.

We are now digging in Aranbaltza (Barrika). This is an outdoor site, located by the sea, with huge accumulations of sediments that we have reached 8 meters and will probably be much more. But for excavation it is almost impossible, as everything is sand and is filled with water.

In other caves there is not so much accumulation of sediments. There is an exception. Located in Zierbena, 600 meters high, it is a very deep hole. Below appeared some animal fossils that will be approximately 800,000 years old. Therefore, here there is the possibility of finding an “Atapuerca”, but if it is found it will be by chance. We have tried in different places and we have never spent 300,000 years. But that is my dream.