“I want the blind to see the world using technology”

Japanese Asakawa de Chie dreams of being an Olympic athlete. But his dream was frustrated when he began to accidentally hurt the optic nerve as a young man and to lose his sight, which became blind over time. He has subsequently worked as a computer scientist and contributed to improving the quality of life of blind people through eleven technological contributions. Blindness is an obstacle to work, but at the same time, living on his skin has led him to know perfectly the needs of the blind. Hence perhaps its value and its success. He is currently a researcher at IBM and we have interviewed him taking advantage of the visit of the Egokitzen Laboratory, which turns 30, to the Basque Country. 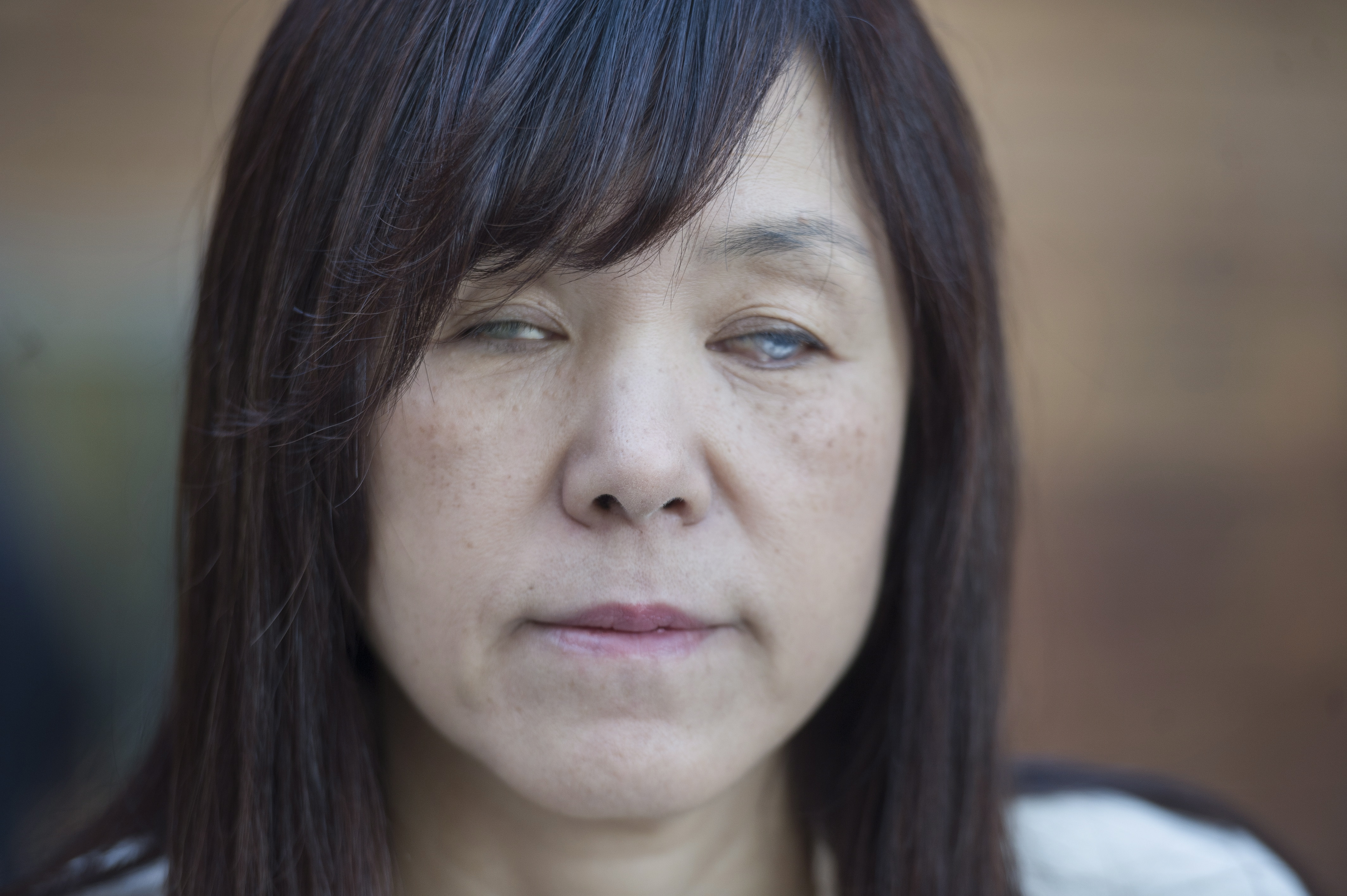 What does accessibility mean in your everyday life?

Throughout your life you have worked to facilitate access to technology for blind people. Looking ahead, one of his first contributions was to get a digital processor for braille documents, right?

Yes. At age 14 I was blind with a blow to my left eye while in the pool. I found it difficult to live without seeing and had two main difficulties, among many others: on the one hand my mobility, and on the other hand I needed resources to access information. At that time there were no computers, no internet, no smartphones. There were books recorded on tapes and only braille books to read by hand. It was hard to find books written in Braille, and even harder to find the book I wanted. These two difficulties led me to work on accessibility.

I started working at IBM in 1985, developing a braille editor, braille vocabulary and a network or braille network system. To create a braille editor, I started developing the braille keyboard and making braille translators, so computers could also run the braille. In fact, until then the books in braille were typed or on braille paper, so if there was an error in the text it could not be edited. The braille creation process became digital.

With these editors, Braille texts proliferated greatly and, in addition, began to spread more easily. Since the digitalization of braille everything related to braille has changed a lot. The writings in Braille are much more accessible.

It is also known because in the 1990s it developed Internet browsing by voice, that is, the technology of converting texts to voice. You could make the Internet available to the blind.

Yes, besides digitizing the braille, this was another of the most outstanding novelties. In the mid-1990s, I thought Internet access in a simple voice would change the lives of the blind a lot. There would be a leap.

Then I proposed using the keyboard. Anyone who cannot see the screen and cannot use the mouse should also be able to browse the internet. So I developed a system where the blind could surf the internet with only 10 keys. For example, the first three keys serve to move from one link to another; the next three, to move from one line to another, etc. In this way no screens or mice were needed. From there, the blind would have been able to read newspapers every day, make purchases or read bank balances online.

With the voice finder many things became possible for the blind and it is significant that when this system came out we had great feedback from the blind. I remember what one especially told me: “For me the Internet has become a small window into the world.” For us this mention was very important, so we realized the importance of this system for blind people, to facilitate access to information. 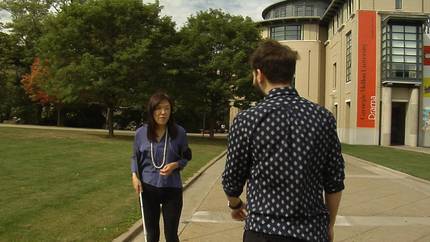 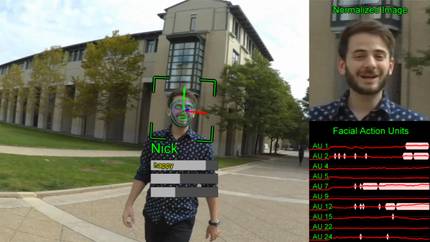 Chieko Asakawa meets a acquaintance and uses her cognitive assistant to identify what lies ahead and to know what emotion manifests. Ed. IBM Research

Recently, at a TED conference, he highlighted that accessibility encourages researchers' creativity and that these technologies are not exclusively for the blind, but for everyone. Do you think we are quite aware of it?

It is a very important issue. Many people do not know the origin of innovations. For example, the phone: Graham Bell developed a communication tool, but apparently sought a way to facilitate communication among the disabled. But many people don't know.

Another example is drivers who must drive but at the same time have to be informed. And these voice-based technologies are very useful to them. Keep in mind that accessible technologies try to complement diminished capacities, but they are also very useful for those who are not, when one of the senses is busy.

You are now developing a new smartphone app that, as you say, will help you navigate our world. That is, it improves the analog life of the blind. How does this technology work? How does it help you?

Now you can get a lot of information using technology, but it is still very difficult to access the real world. There are so many things around us: posts, signs, people, constructions… All this we can not internalize without vision. We call this problem “real world accessibility” and that is the goal of my current research. I want the blind to see the world using technology.

Our first goal is to develop navigation systems inside and outside the home. We have GPS out, but the GPS has little precision (sometimes it may have a 20-100 meter error), and that's not enough for a blind. Nor for the interior of the house is there a specific system of location. So, we have created a system that places the person with a meter and a half accuracy, both outside and inside.

With our application, a blind can navigate with a meter and a half accuracy. If you say “I want to go to college,” he will tell you how to get out of the door, when to go right or up, when there are stairs… It will help you get to college.

But our goal is not just the navigation system. We also want to use cameras to detect the information around us: for example, to know faces, objects… To detect things around us. Our goal is ambitious and requires the collaboration of researchers and developers around the world.

What are the main technological contributions that have improved the lives of the blind in their experience?

The most important and practical thing has been the technology accessible for Internet access, since it provides all the information available on the network. We can communicate by email with others. That's the most practical thing right now. If there is someone who has not yet used this technology, I encourage the Internet in their day to day. Being blind, I don't imagine my life without the Internet.

We have not yet reached the second because it is not available anywhere. There is a lot of work to do to access the real world, but that will really change our life. Location systems allow the blind to move around the real world without getting lost. Navigation is very important to get closer to the real world, but there is still much to develop. Systems are available but more work is needed to make them more useful and practical. In addition to a technology that facilitates the interaction between man and computer, we need others. For example, robotics, artificial vision, artificial intelligence… and we also need the help of psychologists.

And in society is it enough with the level of awareness we have about accessibility? Or are we still far from understanding your world? What do you think is missing to ensure accessibility for all?

It's a good question. To achieve our goal we still have to move forward a lot. Therefore, all the technologies we develop are open source, not secret, because we hope that we will develop them much faster among researchers around the world. What's more, not just researchers and developers, the more people are aware of this issue, the faster we'll get the blind to reach that real world. Imagine if you understand how important accessibility is without being a researcher, you can help a lot. For example, if you are an architect, when you make a city or a home, you will do it differently. No cushions, no stairs… As the level of consciousness increases, you can get many things faster.

Chieko Asakawa was born in Osaka (Japan). He graduated first in English Literature and then learned to program. Since then he has worked at IBM as a computer scientist. He has pioneered the development of technology for blind people such as voice navigation on the Internet. The impact of Asakawa's work is reflected in the awards and merits received, including the Japan Medal of Honor.

Adapting the Laboratory working for accessibility in Euskal Herria.

Researcher Asakawa de Chie arrives in the Basque Country with the excuse that the EGOKITZEN Laboratory turns 30. The Egokitu Laboratory, with a long history in researching the interaction between men and computers for special needs, has brought a great speaker for the celebration.

The anniversary has been used to check the evolution of the accessibility study and remember the work done by the laboratory. The laboratory is located in the Faculty of Informatics of the University of the Basque Country, in Donostia. Retrospectively, Julio Abascal, director of the Laboratory, recalls his birth: “In 1985 we worked in the hardware area with microprocessors, but we didn’t see our future only among computers. That year we were called from Aspace and asked if it was possible to create an electronic communicator for a girl who could not speak. We immersed ourselves in that work and realized it was what we wanted to do.”

These first works were almost handmade. On the one hand, because the particular case of each person needed a different treatment and on the other, because he had not yet developed a methodology for designing special interfaces. “This type of work was not sustainable. Each case required a lot of time and technological advances quickly rendered our designs obsolete. That is why we diminish specific designs and enter the path of Universal Accessibility.” Universal Accessibility or “Design for All” aims to make common technology accessible to all.

Currently, it uses transcoding techniques to make accessible websites inaccessible and works on the eGovernability project, in collaboration with European administrations and universities, with the aim of making electronic management more useful and accessible.

But in the accessibility study not everything is pink. Julio Abascal himself states: “In this field many unviable promises are made. And a sum of money is spent on some technologies without future, for the benefit of research groups and companies, but to the detriment of users. It will be very important to deepen the ethics of research and development.”

Asked about his future goal, Abascal states: “That all digital technologies that are designed be accessible to all, that is, all tools and programs, and their services. Moreover, we hope that in the future design methodologies and tools will avoid inaccessible designs. To achieve this, it is necessary to incorporate social awareness and inclusion laws into technological advances.”