Biotechnology and environment in the week of science and technology

The second day of the Science and Technology Week organized by Saretek has taken place a series of changes in the scheduled talks, such as the substitution of Kenneth Timmis by Juan Luis Ramos, invited to the Miñano Technology Park in Álava. However, it should be noted that issues of great interest have been addressed.

Juan Luis Ramos, director of the experimental station of ZAIDIN of the General Council of Scientific Research of Spain (CSIC), spoke about the possible application of biotechnology to the environment, in particular about the possibilities of degradation of pollutants by biological means. After the talk, we were able to ask a couple of questions. 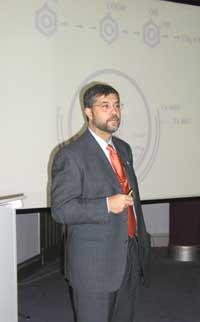 In his intervention he mentioned the lindane and has said that you are developing the technique to eliminate it. What are you exactly in?

Yes, that's right. As you already know, the use of lindane pesticide in Euskal Herria, Galicia and other places was very important, and we are working on the technique of eradicating the pollution generated at the time in collaboration with various research centers, among which is GAIKER.

Biotechnology has a great strength in the United States, while in Europe it looks with suspicion to this technology that produces genetically modified organisms. What do you think will be the trend in the future?

It is true that biotechnology has great strength in the United States, and Europe goes far behind, even in basic research. For 15 years, Europe was a leader in biotechnology research, despite the fact that more applications were being worked in the US. Research in biotechnology is now disappearing from European programmes. This means that it will not give any facility to advance, that the works we have done are already paralyzed and that we do not have permission to carry out field studies...

It is often mentioned that the risk that the foreign genes introduced in the recombined organisms pass into nature generates fear. But now we have ‘suicidal’ bacteria, so once the contaminant has disappeared we can also remove the bacteria. However, in no case will the risk be zero. On the other hand, biotechnology has also made a mistake: a great hope has often been awakened and what was expected has not been fulfilled.

In Spain, however, there are no grants to research in biotechnology. We are now investigating how to deal with pollution by industrial activities with biological means. But in Spain, this is not the biggest environmental problem. Industrial waste in the north and in the centre of Europe is the biggest problem, but the residues of olive oil production in the Mediterranean are more harmful to the environment. When making a liter of oil is generated a liter of alpechin, which is a very harmful contaminant. A medium-sized company of olive oil production pollutes more than New York City a day.

Therefore, first you have to know the problems and then biotechnology is there to face each problem in the most appropriate way. For the moment, we cannot use it, but we are working on the development of the media.