In early March, the Nobel Prize in Physics Antony Hewish went to Donostia. Taking advantage of this occasion we turn to him for the next interview. Through these lines we want to thank the welcome that made us this slim and friendly man of sixty years.
Elhuyar: Are you going to give us details about your life? 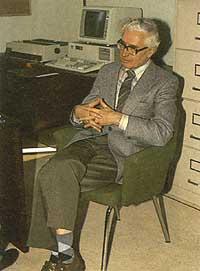 Antony Hewish.– I was born in western England, in a small coastal town of Cornuales. So I want the sea. My father was a banker and my family had no special environment with science. But I became interested in science and went to Cambridge University. It was 1942 and was in World War II. After a year at university, I had to go to the army and there I worried about the technological problems. I worked on the team working on radar development. I spent three years in that task. Then I returned to Cambridge.

Being a researcher was not my intention, I wanted to do something more applied. But at the end of the race I got quite good notes and I had the opportunity to continue in Cambridge. I was told I could start on radio astronomy. The team was led by Martin Ryle. I already knew him, because when I worked on the radar team during the war I found him. We worked in the same workplace and our team and yours had close relationships. So in 1948 I joined Martin Ryle's team as a research student.

Radio astronomy was newborn and it was very nice to start working on it. In addition, Cambridge was the most important place of radio astronomy in the world. Therefore, it was the best place to investigate and I was very happy. Then you know, in my research I have been very lucky, it has been a very prosperous path. All this with the discovery of pulsars.

Elh.– Our second question refers precisely to the bracelet you just mentioned. As mentioned in encyclopedias, their discovery was casual. Could you explain how it was?

A.H. – It really was a luck. At that time I was designing a new radio telescope that was used to detect the pulsions. So, my interest was to find quasars. These are very compact, very small objects that emit radio waves. We can detect them using these radio waves.

When you observe a quasare they flash like the stars because of the plasma clouds emitted by the sun. This is happening constantly. In 1964 we realized that common galaxies and quasars can be distinguished with this flash. So I designed a very sensitive radio telescope. It had to be so because I wanted to detect objects very far away and very weak. He also had to work at large wavelengths.

Radioastronomers normally work at reduced wavelengths in cm. I did not use the radio telescopes made to work in that interval, since the brightness generated by the solar plasma is only perceived when using greater wavelengths (about one meter). So I designed a very large and responsive antenna. He worked at a wavelength of one meter. We began to systematically explore the whole sky in search of fluctuating signals. That is precisely what you need to find the pulsars, and working like that without them is almost impossible.

Elh.– For many of our readers astronomers are people who explore the sky through the lenses of a telescope. Radioastronomers do not work like this. What is the difference between radio astronomy and optical astronomy?

In the sky there are objects that are detected by radio and cannot be detected through light.

If you want to detect radio waves coming from the sun, you need a suitable tool. It should be sensitive to radio waves. If you want to know where they come from, you need a large collector, something big in the shape of a ring to be able to measure the angle. I mean the radio telescope is analogous to the optical telescope, but you can't take pictures. It measures the force of the coming radiation and can turn it into a radio image. So with radio telescopes you get a different picture of the universe.

Elh.– The Big Bang is currently used. What is that Big Bang?

A.H. – What is the Big Bang?. It is only the origin of the explosion of the universe.

When I started researching in the 1940s, we had no idea how the universe was born. There were many theories, but all we knew was that it is spreading. Everyone agreed.

In the 1960s, astronomers discovered thermal radiation in the US. Today it is called microwave background radiation. This radiation occupies the entire universe and corresponds to the radiation that occurs at very low temperature (several degrees above absolute zero).

But if you ask yourself what the universe was like, the answer has to be very hot. To explain these two things you have to think that the expansion of the universe and the high temperatures of yesteryear, that is, at the beginning of the process, was a cosmic explosion (like a huge nuclear explosion).

This is our image of the origin of the universe, the creative explosion we call the Big Bang.

Elh. – You have explained the origin of the universe. What is our image of the present universe?

A.H. – Well, we can draft the universe. The universe is terrible today. It is full of galaxies. Galaxies are sets of millions of stars at once. At first glance we only see some of them, but with a telescope the show extends a lot.

Galaxies are the constituents of the universe, the bricks. The universe is a huge fracture of fifteen billion years, made up of millions of galaxies. These galaxies and the stars inside are constantly forming. The whole system is expanding and it seems that it will continue in the future forever.

However, this problem remains open. The process has the possibility of stopping and retreating.

A.H. – Yes, it is expanding forever, but the process is accelerating. And if you look long term, the deployment can be very slow and finally stop it. I believe that the universe that expands forever is the most appropriate image. However, what will really happen will depend on the amount of materi in the universe, as if there is matter, the gravitational pull will begin to work and the expansion will accelerate. The most appropriate theoretical model is to have enough matter to balance gravity when the universe is infinitely large. That is, it starts fast and then shakes. But it will never stop because it takes a long time.

Elh.– Let us now put astronomy aside and start in another field of physics. In recent times, physicists are making great efforts after a common theory of physics. What do you think?

A.H. – I think it is possible, because we have already put together forces that we consider quite different. When I started studying physics there were electromagnetic and weak forces, which kept internal elements of particles like neutron involved. We think these forces were quite different, but today we know they are different aspects of the same force. We know this thanks to advances in particle physics (prediction and discovery of W and Z particles). Therefore, the four forces that were once now are three.

From the theoretical point of view, that Unified Theory which will encompass all the forces and which you have mentioned is very attractive. Of course, we will have to include gravity. It is speculation, very attractive speculation, which may be related to the origin of the universe. If we consider that there is a joint theory of this kind, we can understand some of the main problems of cosmology. For me, there is a very close relationship between the initial universe and particle physics (basic forces). The energies needed to demonstrate Common Theory may never be reached. But observing the cosmological phenomena that can happen in the universe, analyzing the behavior of the universe, we can test with the Unified Theory, using the universe as a laboratory.

Elh. – Changing to a new topic, do you think you have to take it to research and teaching?

A.H. – Teaching is a very good exercise for everyone. If you don't stand in front of students who can ask unforeseen questions, you'll never think of it. I think people who are researching have to teach it. Otherwise, students have no relationship with people who are conducting advanced research. Research and teaching should go hand in hand. This does not mean that there is no good teacher who does not do research. However, students should be in contact with the professor who is at the head of the research to spread the word.

If researchers were traveling alone on their way, they would be happy because they don't have to face the students' questions. On the other hand, if the professor has lost relationship with research, he does not know the latest advances and does not realize what happens in the world of research.

Elh.– Large sums are needed for research. Who do you think should pay for the investigation?

A.H. – Payment will be distributed among several entities. The university must have autonomy. That is very important. The university should not be controlled in its functions.

The way to achieve freedom would be to have funds of open thought and to give them funds to the university so that it can enjoy them freely.

The industry must also finance research.

The university should receive funds from all places to achieve balance and freedom on the one hand. If you have only one source of income, it is dangerous.

Elh.– San Sebastian is, for many, a good place for congresses. What do you think?

A.H. – This question is making me increasingly familiar. Of course. It is an ideal place for congresses. People have everything they need. Beautiful location, it is a nice city. It's not a city like Los Angeles. It is well connected and easily accessible. He lacks a strong university, but is on the way. Meets at least the minimum.

Fdo.– End. What did you feel about receiving the Nobel Prize in 1974 with Martin Ryle?

A.H. – I didn’t expect it. I was very happy. I didn't know it was presented for it. That is done in secret. Sometimes there are previous friction, but I didn't hear anything.

I was in London at a meeting. A bedel came to me and gave me a piece of paper written with pencil and bad letter. The 1974 Nobel Prize in Physics said they were Hewish and Ryle. Look. We were discussing spending ten thousand pounds on an electronic tool... I looked at the piece of paper and couldn't concentrate... The phones were playing outside and the good thing was that I wasn't available to them.

Elh.– Thank you very much to Mr. Hewish for this interesting interview.